Muscles of the Bowers Gang

Reginald "Belch" Huggins is a supporting antagonist in Stephen King's IT. He one of the bullies in Henry Bowers' gang and acted as the muscle for the group.

He was portrayed by Drum Garrett in the 1990 adaptation and Jake Sim in the 2017 film adaptation.

Henry, Victor Criss, and Belch would often pick on the Losers, the seven main characters. While chasing after one of them, Mike Hanlon, they engaged in a rock fight with the Losers and lost. Henry swore to kill them all. As they made their way into the sewer to fight Pennywise, Henry and his friends followed them in to kill them.

The group separated, an act which led to their deaths, save Henry who was traumatized by his encounter with IT. IT assumed the form of Frankenstein's Monster and ripped off Victor's head. While Henry fled, Belch stayed behind and fought, getting his face ripped and body beaten to death by the monster.

Thirty years later, when Henry was incarcerated in a mental institute, IT took the form of Belch and told Henry to escape and kill the Losers. IT also assumed the form of Belch when helping Henry get to Derry in a 1958 Plymouth Fury similar to Christine, notably grinning the whole time.

Similar to the novel, Belch is 6 feet tall though fourteen years old rather then twelve and the biggest and strongest of Henry's friends, and the most loyal to his sociopathic nature. He had curly brown hair and a brownish-green jacket, giving him a more greaser-type appearance than the novel along with the rest of the group. However, he has a more minor role in the book (though he seems to have more lines and brains than Victor "Vic" Criss and his death also occurs in a different fashion when IT (as Deadlights) bursts through a sewer pipe, grabs Belch and bends him half while dragging him into the sewer pipe as eating noises are heard shortly after Belch's body disappears. In Part 2, IT takes the form of Belch while returning Henry to Derry thirty years later.

Belch is one of the main antagonists of the Losers, alongside Henry Bowers and company. Here, due to being portrayed as a teenager, he drives a blue Trans-Am and serves as the driver of the Bowers Gang. However, while still stronger than the rest of his friends, Belch is more heavily built than earlier depictions and is dwarfed in terms of height by Patrick Hockstetter, contrary to the novel and miniseries in which he six feet tall and, therefore, dwarfing the rest of the Bowers Gang. Along with the rest of the gang though, he is given a more modern appearance and even wears a baseball cap, similar to his depiction in the novel.

He first appears in the hallway scene at Derry High School when the bullies watch Bill, Richie, Eddie, and Stan pass them by at the end of the day. Whilst harassing them outside of the school, Belch opens belches in Eddie's face, being more disgusting than his novel counterpart. Later while driving the gang through Derry, he ambushes Mike Hanlon, who had just had a disturbing encounter with IT, by driving his car through the alley of a butcher shop that he was delivering meat to and almost running him over. He flips Mike off before driving away. Henry and his gang, including Belch, ambush Ben Hanscom outside of the library and drag him to the local kissing bridge. Belch helps Vic hold Ben down by his arms while the group harasses him, with Patrick threatening to light his hair "like Michael Jackson" with a makeshift blowtorch. Belch becomes shocked when Henry uses his switchblade pocket knife to carve his name into Ben's stomach, only getting as far as the H before he kicks Henry and falls over the bridge and down the hill. As the Bowers Gang gives chase, Patrick and Belch are ordered to continue pursuing Ben when he flees into the Barrens while Vic stays behind to help Henry find his knife, which he lost while tumbling down the hill. While searching for him, Patrick orders Belch to search the forested area of the Barrens, while the former searches the river area (which is the direction Ben fled into). Patrick wounds up in the sewers and gets devoured by IT.

In the deleted scene, Belch and Victor drive to Henry's house to pick him up. Belch tells Henry that Patrick's whereabouts are still unknown but Henry states he doesn't care. Henry orders Belch to drive after they see Mike ride by on his bike and Belch proceeds to drive off.

Later, the Losers notice the Trans-Am next to Mike's bike and hear the yells of the Bowers Gang bullying, and go to help Mike, who is being tormented by the thugs who are trying to force him to eat some of the raw meat that he was delivering to the butcher shop, which leads to the rock fight.

Later, Belch is again shown with Henry and Vic when Henry is shooting objects into pieces for fun but becomes alarmed when he considers shooting a cat dead for fun. Its clear Belch is disturbed by Henry and struggles to hold the cat still. However, Butch Bowers, Henry's father, comes over and scares Henry into submission by shooting the ground with his pistol.

Belch is shown later with Vic as Henry sits in front of the Trans-Am, clearly scared of his father. Vic asks if Henry is okay, and Henry doesn't answer, as he just walks over to the mailbox, completely oblivious to all else, and there is a balloon hovering over the box. Inside, Henry finds his lost pocket knife, and murders his father.

In a scene cut from the movie, Henry kills Belch along with Vic and takes Belch's Trans-Am, driving it to the Neibolt House. This is unlike the novel and the original film, where Belch and Vic followed Henry until their deaths at the hands of IT.

While a member of the Bowers Gang, Belch doesn't seem nearly as psychopathic as Henry and Patrick. This is shown when Henry was trying to carve his name into Ben's stomach, with Belch being shocked by this and actually wanting him to stop. He was also shocked and disturbed when Henry attempted to kill a cat for fun until he was stopped by his father.

Despite this, Belch still helps Henry and his friends terrorize kids around the town. When Belch is bullying other kids, he uses his size and somewhat good strength as a way of intimidation. Although his and Vic's bullying is more childish and simple bullying compared to Henry and Patrick's more depraved and horrific actions.

Regardless, Belch still seemed to be one of the more humane bullies amongst the Bowers Gang. In the books, it is hinted that he may have become gentler if he grew up into an adult and could have even redeemed himself.

Belch and Henry became friends in 1952, when they were six years old. He was one of his closest friends along with Victor Criss and together they would bully and beat up other students whom they disliked. He was one of the few people who Henry genuinely liked and showed and concern or fondness for (the only others being Victor Criss, Patrick Hockstetter, and, in the movie, Conner Bowers). Belch is fiercely loyal to Henry, obeying every command, desperately trying to keep him happy and even having his own opinions influenced by Henry's feelings.

During the summer of 1958, the Losers Club and the Bowers gang develop a rivalry. They two gangs have a rock fight, and Belch is the last one to run away. Due to his dimwitted nature, he doesn't understand that Henry's going insane and he continues to go along with Henry's brutal plans. He follows him into the sewers and he meets his fate, being torn apart by Pennywise when he tries to protect Henry, just proving how much Belch really venerated him. In 1985, Henry is broken out of the mental asylum and It disguises as Belch. Henry, completely insane and psychotic, begins to apologize to "Belch" for leaving him to die in the sewers, and seems sad when he can't.

Their relationship is portrayed similarly in the miniseries, though Belch is treated as a bit more like a lackey than a friend. In the film, the two are much closer and Belch is always seen by Henry's side. He's the main driver for the gang, and Henry always sits next to him. Despite their close friendship, Henry still snaps at Belch at least twice. The first time is when they assault Ben near the kissing bridge, and Belch asks him to stop. Henry yells at him to shut up and do some work too. The second time is in a deleted scene when he picks up Henry in his car and he starts to talk about Patrick Hockstetter, and Henry says that he doesn't care and just wants to leave. In a deleted scene, Belch's throat is slit by Henry while he was possessed by It. Without any mention of it in the 2019 film, it's unknown if his death scene is canon or not.

The two don't interact much in the book, but they do seem to get long decently. They, Henry, and Moose Sadler assault Eddie Kasbprak and break his arm, and then later they hang out in a junkyard with Henry and Vic. Belch never mentions Patrick's disappearance in the novel, showing the emptiness of their relationship.

It's done differently in the movie, because the two act much closer. They bully members of the Losers Club and laugh at Henry's every insult. The 'hurt train' that Patrick was meant to participate in was cut short for him because he gets killed by It while searching for Ben with Belch. Belch seems to be the only one that's affected by his disappearance, but possibly just due to screen time.

Vic and Belch were close friends as children, and both were loyal to Henry Bowers and closest to him. Vic and Belch were both less sadistic than Henry, but Vic was the only one that notices Henry's deteriorating sanity. Because of this, Belch rarely thinks rationally around Henry, causing him (and Vic) to both get killed in the sewers by It in 1958.

In the miniseries, they're relationship is played very similarly. In the 2017 film, Vic and Belch are also played as close friends who do Henry's bidding. The only difference is that Belch seems to have a better sense of morality and even some intelligence, in contrast to Vic being more sadistic. During the film, they, along with Henry Bowers and Patrick Hockstetter, taunt and harass the Losers Club during the summer. Belch and Vic both express concern for Henry during an encounter with Ben Hanscom when Henry loses his knife and exclaims that "[his] old man will kill me!". In August, Henry is with both of them, shooting things with his dads gun. This is stopped by Butch Bowers, who Vic and Belch both dislike for his abuse of Henry. They try to help him out, but during a deleted scene, it's revealed that Henry killed them under the influence of It. With no mention of it in the 2019 film, it's unknown if this is canon or not. 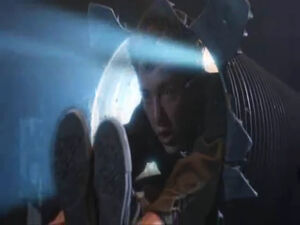 Belch's death in the miniseries.

Belch and Victor "Vic" Criss's corpses after being killed by Henry Bowers in the 2017 film.
Add a photo to this gallery 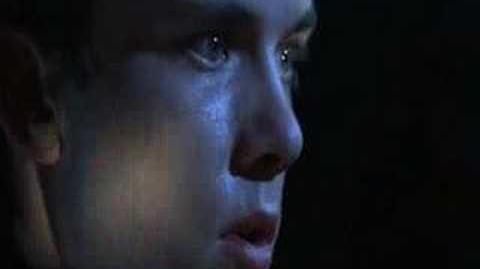 Stephen King "IT" (clip 3)
Blech's demise in the miniseries.
Add a photo to this gallery

Retrieved from "https://villains.fandom.com/wiki/Belch_Huggins?oldid=4279999"
Community content is available under CC-BY-SA unless otherwise noted.