The Lord of Lies

Demonic Overlord
Belial is one of the "Lesser Evils" of Diablo lore, despite the title this is not a signal of him being weak - in fact he is extremely powerful and is only dwarved by the Hell-Lords known as Diablo, Mephisto and Baal, like all the higher Demons he is given a title which fits his role in the series and his is none other than the Lord of Lies. Belial is one of the major antagonists in Diablo III, the latest installment in the series.

He was voiced by Jim Ward, who also voiced Herr Kleiser in the Ultimate Avengers films.

Belial advocated the notion that perception is reality, and it was his sole purpose to dominate reality. He did not lie simply for the sake of lying, but rather to deceive with the intent of controlling others' perception of what is real. He relished the moment his victim realized they'd been deceived, that moment of nakedness and betrayal. If Belial had a weakness however, it was that he was often trapped within the intricate webs of his own machinations.

Tyrael described Belial as desiring power above all other things and that his thousand schemes are designed toward his ends.

Belial had once been a protege of Mephisto, honing his powers of deception under the Lord of Hatred's guidance. Eventually, he would turn on his mentor and manipulated Azmodan into leading a revolt against the Prime Evils, though this may have likely been indirectly encouraged by Mephisto himself. With the armies of Azmodan and Belial unified, the Prime Evils were cast out of Hell, though at the expense of a full third of Hell's Demons. Azmodan and Belial were left to vie for power over the Burning Hells, a conflict Belial ultimately lost. Years later, much like the Prime Evils, Belial would turn his attention to Sanctuary and corrupting its populace. His influence over the mortal Realm mirrors Mephisto's own of twenty years prior, as his power over Caldeum, capital of Kehjistan, was nearly complete until he met an untimely demise at the hands of the Nephalem. He later became a part of the Prime Evil, who was defeated, again by the Nephalem. He is was trapped the Black Soulstone until Malthael's actions released Diablo with the other six evils still merged with him. 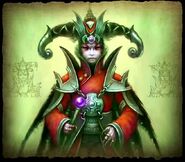 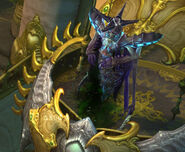 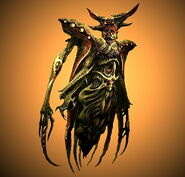 Retrieved from "https://villains.fandom.com/wiki/Belial_(Diablo)?oldid=3791425"
Community content is available under CC-BY-SA unless otherwise noted.