Demonic Minion
Belial (called Zarlox in the NES localized version of the game, Dragon Warrior II but renamed in the newer versions) is one of Hargon's most powerful minions along with Atlas and Pazuzu, and a formidable boss that appears as the last guardian in the final dungeon of Dragon Quest II.

Belial resembles a yellow winged bull that holds a trident. Being actually a palette swap of the Archdemon enemy. It is both physically strong as well as a powerful spellcaster, being able to cast Buff and blow scorching flames.

This demon became a regular monster on later games and in Dragon Quest Monsters spin-offs, which can be synthesized with an Archdemon and a Dessert Demon, belonging in the demon family. 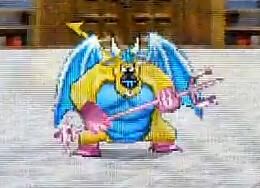 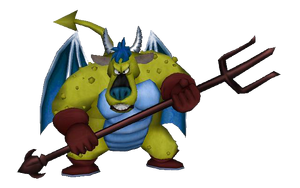 Retrieved from "https://villains.fandom.com/wiki/Belial_(Dragon_Quest)?oldid=3867317"
Community content is available under CC-BY-SA unless otherwise noted.