Killing and deceiving humans.
Attacking and punishing other spellcasters who helped humans as traitors to their kind.
Serving the Witch Queen.
Casting curses upon victims.

Help the Witch Queen destroy the human race (failed).
To bring about a world of ruling witches and warlocks forever (failed).

Belial (real name: Baltasar Ketola), also known as the "Eye of Obsidian", is one of the secondary antagonists (alongside 37th Dolan) of the 2015 supernatural action movie The Last Witch Hunter. He is a powerful and highly dangerous renegade warlock, and a Finnish national from Finland, who was also one of the most dangerous criminals on the planet due to his ties to a network of different terrorists he was born to according to his profile on the FBI database, and he has been working towards one goal, to revive the dreaded Witch Queen and return the Earth and it's inhabitants to the dark days of her reign via the next Black Plague destroying the entire human race. He is extremely skilled in the ancient ways of dark magic and he has a mastery of fear potions which he used upon his prey to interrogate them and to take sadistic joy in making them suffer their worst nightmares. He also happens to be 159 years old or older.

He was portrayed by Ólafur Darri Ólafsson.

According to what 37th Dolan found in the FBI database, Belial was born as Baltasar Ketola in Finland. He later became one of the most dangerous criminals on the planet due to his ties to a network of different terrorists. Believed that witches and warlocks are better than humanity, he sought to revive the Witch Queen presumably due to being inspired by those who were still loyal to her.

Belial's first on-screen debut in the film was when he was seen on the outside of the 36th Dolan's residence at the St. Chrysostom’s Mission center after the 37th Dolan left. He then entered the house and tortured the man with a Plague Fly. But the 36th Dolan was persistent more than 5 minutes unlike his previous victims, so he decided to curse him to near-death. To covered up his tracks, he uses a containment spell both on the 36th Dolan and his room so when someone who would find the 36th Dolan's body in his room, they believed that he have died. He also left behind a clue, a very rare and forbidden herb known as "Griffin's Henbane" once used in necromancy and evil magic.

After discovering that his dear friend, the 36th Dolan, was not dead but cursed by someone else via a Plague Fly, Kaulder knows this Plague Curse has but 2 days to develop and completely consumed the former Dolan, killing him. So while under a trance via Chloe's memory potion at her witch bar called Last Night to "remember his death", he was interrupted by Belial who chains his right hand to the bar floor before continued vandalizing Chloe's bar. Kaulder breaks free and fights Belial. He knocks down Belial with the warlock's cane. Kaulder tries to hit Belial but the sorcerer was protect by his invisible magic shield. He then told Kaulder that the 36th Dolan lasted his torment at Belial's hands longer then 5 minutes that all of Belial's unfortunate victims have not. Belial then pushes Kaulder to the bar counter and wasted no time to use a fear potion on him before finally proceeding to set the whole bar on fire with his magic. Chloe used a counter potion on Kaulder to save him from this mind-breaking fear spell. Belial then escapes as he says "After 800 years, you've ran out of time. Death is coming, Witch Hunter!".

Belial used his dark magic to perform a second attack, this time on Chloe's apartment. As his magic powers nearly traps the dreamwalker in the shadows, Kaulder rescues her before it was too late.

Belial tracks down the blind merchant named Max Schlesinger whom he see as a disgrace to their own people for aligning himself with the Witch Hunter. Max recognizes Belial's voice. He tries to explain to him that he has no choice or Kaulder would kill him. Belial has plans for Max as he now uses his sorcery to transport him to the shadows and disappears.

Belial later tied Max Schlesinger to a tree somewhere in the New York area to use him as a living cocoon to bring the Queen back after burying the heart in the dirt next to Max during a ritual sacrifice. The dirt which was recently sold by his fellow magic-wielding conspirator Danique, was burial dirt used in necromancy.

Kaulder arrives and finds Max engulfed in roots and possessed by the spirit of the Witch Queen. Belial, disguised as Chloe, appears from behind and blind Kaulder with his pyromancy before grabbing his rifle and shooting at him twice without hesitating. Kaulder then struck back and kills him with a dagger to the throat. The Witch Queen is already half-alive until she reaches out with her left arm and grab Kaulder as she did before in their last battle centuries ago, draining his energy. Belial, died smiling at the sight of his Queen successfully returning from beyond the grave as he falls down.

Belial is a powerful and manipulative warlock skilled in black magic and he possesses many abilities that should not be underestimated, including shapeshifting. He is capable of incantations and he deals with numerous spells. Belial is well skilled in elemental magic, especially pyromancy (fire magic) which he personally favors as his signature sorcery, was used in arson, one of his many horrendous crimes he committed.

He can also cast containment spells to conceal his insidious crimes and to create a magical shield around him which can be seen as a magical seal with symbols on a glass wall.

His mastery and abuse of fear potion means he feels no pain. He fights with the casual violence of one who believes himself immortal. The Last Witch Hunter, Kaulder, despite assurances of eternal life, suffers every savage blow.

Belial's second signature magic is a form of teleportation which also deals primarily shown as decadent tree roots emerging out of a portal comprised entirely of darkness appeared on a floor or on a wall, and the roots move around in a tentacular manner as they grabs the conjuror who cast and summon this magic, and they transport him to whatever destination he desires. This aids Belial greatly as not only he hunts and attacks his enemies and victims, but also he eludes capture from the authorities as well as the Axe + Cross Order, especially Kaulder. This magical mode of transportation can be used in grabbing the caster's intended targets (as it did with Chloe and Max Schlesinger), even shown with decaying corpses emerging out of the portal that prevents the targeted prey from struggling and breaking free. The targeted individual would be pulled into the portal as they get sucked into this infinite and nightmarish darkness full of screaming ghouls in decaying arboreal form, which all formed the roaring face of a monstrous entity in this darkness.

Belial also appeared to used a variant of Glamour magic (spell to made one looks younger) to made himself younger as when Kaulder killed him, his face became deformed and more like an old man with grayish skin tone though his hair didn't change colors, suggested that he dyed his hair. 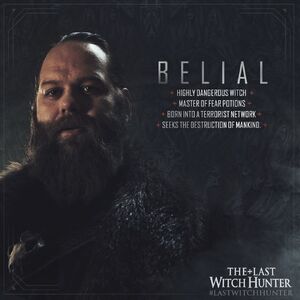 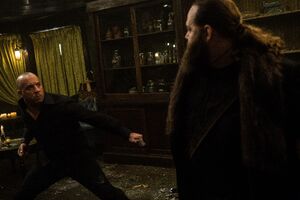 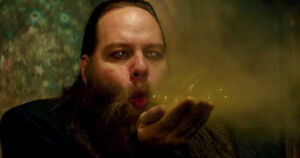 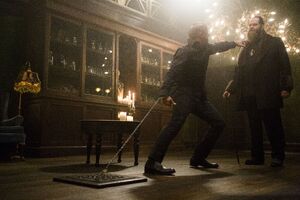 Belial uses his magic power to attack his victims and commit crimes.

Belial in Eli's house as he watch the approaching Kaulder

Belial's smile as he died. Notice that his face deformed where his face more like an old man.
Add a photo to this gallery

Retrieved from "https://villains.fandom.com/wiki/Belial_(The_Last_Witch_Hunter)?oldid=3700572"
Community content is available under CC-BY-SA unless otherwise noted.