Get revenge on the doctors who separated him from his brother Duane.

Usurp control over the world, along with the other abysmal-looking freaks.
Associate with his brother Duane.
Kill everyone who tries to slaughter him and his friends (all succeeded).

Belial Bradley is the main antagonist of the comedy-horror trilogy Basket Case. He is a violent and odious misshapen freak of nature who is often hidden inside a wicker basket.

Belial was once the conjoined twin of Duane but was surgically removed: ever since then the two brothers became deranged and determined to reattach one another so as to be "whole" again.

Duane Bradley arrives in New York City with a locked basket. After he gets a room at a cheap hotel, the contents of the basket are finally revealed: in it lives his deformed Siamese twin brother, Belial. Although conjoined at birth, the twins are surgically separated at an early age against their will, and Belial deeply resents being cut off from his normal-looking brother. As the twins seek revenge against the doctors responsible for their separation, Duane befriends a nurse, Susan. Jealous, Belial attacks and kills her, frustrated with his inability to rape her. Enraged at his brother for his actions, Duane attempts to kill Belial, which results in the two brothers falling from a hotel window.

The two brothers are taken to a hospital for the aftermath of the fall, in the previous film. They are rescued by a woman called Ruth, who is a caretaker of an extended family of other diabolical monsters, like Belial. A reporter comes to make a consensus with the two brothers. But they both know she was a fraudster willing to kill them. When she arrives, she is subdued by the monsters and Duane is given time to release Belial from hiding and they both intertwine each other ready to be together once again.

Now together, the family are forced to hide from the authorities, as their reputation has become uproarious in the world. Ruth orders Duane to avoid the vicinity of his malignant brother, as it is unsafe for them to be together while they are at stake. However, Belial meets a female monster who looks just like him and has libido on him and they make love. Belial has now a bundle of baby beasts who he wants to protect by any means. Duane is later captured by Sheriff Griffin, who is using him as an odalisque in order to get information from him about about his brother. However, he is rescued as a basket is delivered into the office, containing Bradley and tortures and murders the people. With the cops all down Ruth and her people attack places in the world and sends broadcast on TV telling the world that the freaks have now control over the world. If they ever get belittled, oppressed, opposed or humiliated those who do will be killed. After Ruth informs the vital info, she ends by saying; Have a nice day.

Several scenes of Belial attacking people were featured in the Whose Line Is It Anyway? episode "Willie Robertson" during a segment called "Newsflash" where comedian Colin Mochrie stands in front of a green screen and pretends to be a breaking news reporter reporting live. Everyone else can see what's happening behind him/her and the comedian has to guess what's happening based on clues from the other comedians who portray News Anchors. 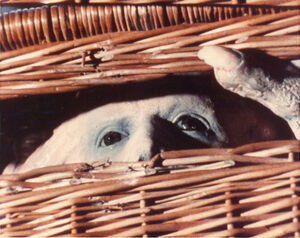 Belial inside his Basket 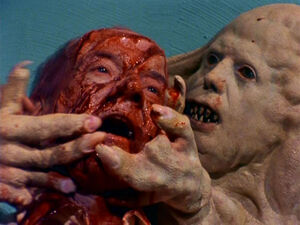 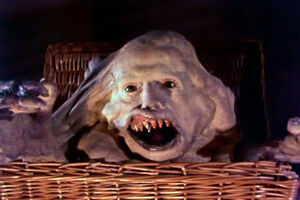 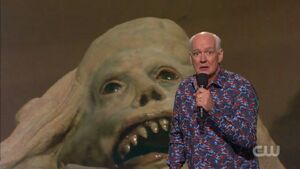 Belial attacking while Colin Mochrie acts as a News Reporter
Community content is available under CC-BY-SA unless otherwise noted.
Advertisement