Assimilate everyone into Paradise Guardia.

Destroy the world and remake it as a paradise using nanomachines.

Bell is the second-in-command turned leader of the Thinknet doomsday cult and the main antagonist of Kamen Rider Zero-One: REALxTIME.

He is portrayed by Seiji Fukushi.

On the day of Thinknet's global assault, Bell led a team of Kamen Rider Abaddons alongside Moore in gassing people with nanomachines so they would be assimilated into the virtual world. They were soon confronted by the forces of A.I.M.S., but easily got the better of them thanks to their superior numbers.

While Bell and the other Abaddons were able to hold the other Riders at bay, Zero-One got past them and went to confront S in the arena Thinknet had taken as their base. During the fight, S brought down his modified Thousand Jacker and created an explosion that leveled the arena. When the smoke cleared S had disappeared without trace, leaving the members of his inner circle mystified as to what had happened, as S had seemingly begun doomsday early and left all of them behind. Bell tracked S's location to a church and led some of the remaining Thinknet members there while the Abaddon Riders fought against the AIMS and MetsubouJinrai.NET Riders.

By the time Bell arrived, he discovered that S's true goal was to simply create a virtual paradise for his wife. Appearing after Aruto defeated S and convinced him to give up on his ambitions, Bell shot S before he could abort the countdown. Mocking S for wanting to revive his wife, Bell claimed the Eden Driver from him and declared he would fulfill Thinknet's cause and turn the world into a paradise, transforming into Kamen Rider Lucifer and grabbing the modified Thousand Jacker with the doomsday clock to use as his weapon.

Refusing to give up just yet, Aruto Hiden and Is transformed into Kamen Riders Zero-One and Zero-Two to fight Lucifer and his Abaddons. After defeating the Abaddons, Zero-One and Zero-Two faced Lucifer just as he stuck the Thousand Jacker into the ground to bring about the end of the world. As the two Riders performed a combined Rider Kick, Lucifer attempted to use the Thousand Jacker to shield himself, but the two Riders powered through it and destroyed him just a few seconds before the countdown reached 0.

After the end of the world was averted, Bell was tracked down and arrested by the police.

Bell is a cunning individual committed to Thinknet's goals. While he appears to believe in S's vision of a virtual paradise, he is fully willing to commit terrorists acts to achieve it, including forcibly assimilating people into the Paradise Guardia. He is also shown to be intelligent and quick thinking, as he easily deduced that S had betrayed Thinknet after he began doomsday early. Unlike S, Bell was not motivated to join Thinknet because of a personal tragedy though, ironically, he would end up proving himself to be more committed to Thinknet's idealistic goals than S was. 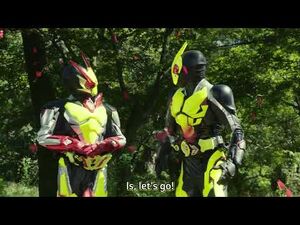 Kamen Rider Zero One Vs Kamen Rider Lucifer
The final battle between Zero-One and Lucifer.