Belladonna (All Dogs Go to Heaven)

Serving the forces of evil

Trying to turn Charlie to the dark side.

To send the dogs on Earth and in Heaven to Hell (failed).

Belladonna (also known as the "Boogeydog", according to angel puppies) is a winged boogie whippet and Annabelle's cousin who appears as the main antagonist in All Dogs Go to Heaven: The Series and in the 1998 holiday film An All Dogs Christmas Carol.

She was voiced by Bebe Neuwirth who also voiced Mirage in the Aladdin franchise.

Belladonna makes her first appearance in the episode "La Doggie Vita". She acts as Annabelle "undercover" to meet with her two recruits Carface and Killer at a meat packing plant. Though the real Annabelle appears and the deception is revealed, Charlie gives into Belladonna's offer of an easier way to life and all the meat he can eat. When Annabelle tries to get Charlie to do the right thing, she even defeats Annabelle by interrogatively reminding her that she allows her angels to make their own decisions. However, Annabelle encourages Itchy not to give up on Charlie. Itchy tries to talk Charlie out of joining Belladonna's side but is captured by Belladonna and strapped to become dog food. Belladonna tells Charlie to pull the lever to send him to his doom as a final test to prove Charlie's commitment to their side. Charlie refuses to harm his best friend and saves Itchy, sending Carface and Killer through the machine to get packaged. Enraged, Belladonna tried to kill them but is defeated by literally having a cow dropped onto her.

Though this is not the end of Belladonna. She returns in the episode "Kibbleland", where she enchants a version of the popular canine board game with the intent of entrapping Charlie and his friends in the game world by means of his own selfishness. She has Carface trick Sasha into playing the game with an enchanted game piece in her likeness which results in her being pulled into the game. Confident that Charlie's selfishness will keep him in the Kibbleland game world, Belladonna goads Charlie and Itchy into entering the game. Although Charlie proves to be quite selfish, the three protagonists make it towards the end of the game. She sends Carface and Killer to strand Charlie and his friends in the game world (although they could not escape due to being selfish themselves). However, Charlie made a selfless gesture of holding the sausage bridge leading the end of the game and thus, was able to escape the game world. Belladonna was not pleased.

In the episode "The Big Fetch", she appears in Charlie's dream in an alternate version. In the dream, it was revealed she was disguised as a cat.

In the final episode of the series "He Barked, She Barked", Charlie is on trial, accused by Belladonna of abusing his angelic position. Allegedly, Charlie had selfishly used a miracle dog tag to whisk out T-Bone steaks while leaving an old canine woman to remain trapped in a collapsing pit. At one point, via projector, Belladonna revealed Charlie's technical sins, happening to be gambling ("Cyrano de Barkinac"), rumbling ("Magical Misery Tour"), faking his identity (though that had been for a reason) ("The Doggone Truth"), driving without a license ("The Perfect Dog"), and, in three different ways, misusing the Miracle Dog Tag ("Charlie's Cat-Astrophe", "Heaventh Inning Fetch", and "Charlie the Human"), to try to prove Charlie is better off with her than doing angel duty. It eventually becomes very obvious that the old widow dog was really Belladonna in disguise. Charlie says that the dog tag failed to levitate the old dog from the pit because it had mysteriously quit on her. However, he manages to put two and two together and has Itchy get a picnic table cover and a hanger for a makeshift old woman disguise to prove that it was Belladonna who had set up the scheme. (It was noted in the episode that the miracle dog tags would not work on anything or anyone of "the other side" which, of course, includes Belladonna.) The judge overseeing the trial opens a cloud trapdoor, sending Belladonna to Earth and presumably back to Hell.

She makes her final appearance in the 1998 TV film An All Dogs Christmas Carol. She plots to use a massive version of the cursed dog whistle to hypnotize every dog in the city into stealing the Christmas presents, causing them to be thrown out of their houses and abandoned (much in the same way Carface was when he was a puppy). Charlie, Itchy, and Sasha move to stop her plan as they try to change Carface's ways a la the Ghosts of Christmas Past, Present, and Yet to Come. Carface is now redeemed (having seen himself in the operation-needing Timmy whom he had stolen operation funds from at the beginning of the film) stops the whistle just in time to prevent the dogs from stealing the gifts. Belladonna flies into a rage and is about to kill Carface and Killer when she is frozen solid by a massive amount of snow caused by Annabelle. She is not seen emerging from it. Her wing which was visible outside the snow is shown turn to rot presumably meaning that Belladonna is dead just like her minions.

While Annabelle is angelic, beneficent, eleemosynary, compassionate and rule-abiding, Belladonna is demonic, prideful, villainous, blasphemous and manipulative, so she’s likely to cast the rules to the wind in favor of doing as she pleases. Belladonna loves to antagonize her cousin and decides to go for a particularly low blow by trying to corrupt Charlie through his desire of living on easy street with plenty of steaks (thus showing a knack for temptation). She also stands out as an inversion of her cousin appearance-wise, being purple with a spiked collar, a black leather vest, and bat-like wings in contrast to Annabelle's halo, angelic robe (if ever worn), and angel wings. She also has a deeper, more bellicose voice compared to her cousin's higher-pitched and orderly tone (a given as Belladonna and Annabelle were both voiced by Bebe Neuwirth).

Belladonna is quick to anger, and she can be quite intimidating, formidable and dangerous in her infuriated state. She also has no real faithfulness to her minions Carface and Killer as she would leave them to whatever fate they got themselves into as seen in "Kibbleland". 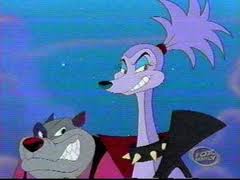 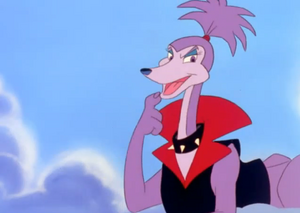 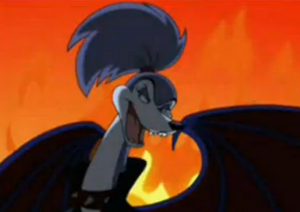 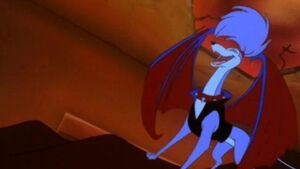