Serving Lord Voldemort as one of his faithful Death Eaters.
Practising the dark arts

Bellatrix Lestrange (née Black), also known as Bella by Lord Voldemort and Narcissa Malfoy, is the secondary antagonist of the Harry Potter series.

Bellatrix was described as being highly attractive in the pensieve, with heavily lidded eyes, and sleek, thick, shining black hair. She was tall and proud. After Azkaban, Bellatrix was still beautiful, but hollowed out.

She makes her first appearance during the Goblet of Fire novel and was already created before, like most Harry Potter characters, she is a pure-blood witch who was the sister of Narcissa Malfoy and Andromeda Tonks (who was disowned for marrying a Muggle-born Wizard), the wife of Rodolphus Lestrange, the cousin of Sirius and Regulus Black, the aunt of Draco Malfoy, the mother of Delphini, and a loyal follower of Lord Voldemort.

In the films, much like in the books, Bellatrix serves as a major antagonist in both Order of the Phoenix and Half-Blood Prince, one of the two main antagonists of Deathly Hallows Part 1, the secondary antagonist of Deathly Hallows Part 2 and a posthumous antagonist in the play Cursed Child She is also the secondary antagonist of the series overall due to her being Voldemort's most loyal, evil, violent, and destructive supporter. Her role is expanded a bit in the films, although she does not appear in the trial scene in Goblet of Fire, with Karkaroff testifying against Barty Crouch Jr., the only Death Eater equal to Bellatrix in insanity and loyalty to Voldemort, who took part in the torture of Frank and Alice Longbottom. Bellatrix was the main torturer, as mentioned by Neville.

Bellatrix Lestrange was born to Cygnus and Druella Black in 1951, and was raised to be a proud pure-blood supremacist, along with the rest of the aristocratic pure-blood Black family. In her youth, Bellatrix attended Hogwarts School of Witchcraft and Wizardry, and was sorted into Slytherin House. After graduating from Hogwarts, she became one of Voldemort's most important, and possibly most sadistic followers, known as the Death Eaters. Bellatrix was one of the few female Death Eaters, and was the wife of Rodolphus Lestrange. 30 years later in 1981, she, her husband, brother-in-law and Barty Crouch Jr. were imprisoned in the wizard prison Azkaban after torturing Frank and Alice Longbottom into insanity using the Cruciatus Curse, her signature spell.

In Harry Potter and the Goblet of Fire, Harry sees Bellatrix being condemned by Barty Crouch Sr. to life imprisonment and dragged by the Dementors to Azkaban for her crimes, along with her three accomplices. This part does not appear in the film, a part from Barty Jr. being captured. She is unnamed at this point, and Harry is unaware of her specific indentity as a Death Eater.

In Harry Potter and the Order of the Phoenix, Bellatrix was broken out of Azkaban by Voldemort and some of his Death Eaters, along with Antonin Dolohov and eight other Death Eaters. Bellatrix and her brother-in-law Lucius Malfoy later led the Death Eaters in the Department of Mysteries to take the Prophecy from Harry when Voldemort tricked him into retrieving it. Eventually, Sirius arrived with Remus Lupin, Nymphadora Tonks, Kingsley Shacklebolt, and Alastor "Mad-Eye" Moody, and he and Harry defeated Lucius and Dolohov. Bellatrix then killed Sirius with the Avada Kedavra curse, blast him into the archway and disappeared, but in the book, she knocks Sirius through the veil with an unknown curse. An enraged Harry attempted to use the Cruciatus Curse on Bellatrix, but was unable to perform the spell correctly as, according to her, he had to "mean it." When Albus Dumbledore arrived to duel Voldemort, Bellatrix escaped through the fireplace via floo powder instead.

In Harry Potter and the Half-Blood Prince, Bellatrix and her sister Narcissa Malfoy had Severus Snape make the Unbreakable Vow to protect Narcissa's son Draco and kill Dumbledore should Draco fail to do so. In the film, she also burned down the Burrow at one point, although it was later rebuilt afterwards; this scene does not occur in the book and is original to the film version. After Snape killed Dumbledore, Bellatrix attacked Hogwarts Great Hall and Hagrid's hut, setting it on fire despite it being made of stone, but in the book she doesn't appear in the battle.

In Harry Potter and the Deathly Hallows,, Bellatrix wanted to kill Harry, but Voldemort said that he must be the one to kill him. At some point before his death, knowing that Voldemort wished to possess the belongings of the four founders of Hogwarts, Dumbledore gave a fake Sword of Gryffindor to Snape, who gave it to Voldemort, who entrusted it to Bellatrix, who kept it in her high-security vault at the wizards' bank Gringotts.

When Snatchers, led by Scabior (in the book they were led by Fenrir Greyback, took Harry, Ron Weasley, and Hermione Granger to Malfoy Manor, Bellatrix saw the Sword of Gryffindor and thought that Harry had broken into her vault. Furious that the Sword of Gryffinor are in the trio's hands, she stunned whole snatchers present, and planned to kill them later. Bellatrix proceeded to tortured Hermione for information, and even sadistically carved the word "Mudblood" into her arm, mutilating her. Then she questioned the goblin Griphook about the sword and decided to kill Hermione; however, Ron disarmed her before she could. Later, Dobby sent a chandelier crashing down toward Bellatrix just as she tried to use her dark mark to summon Voldemort, who avoided it, and as Dobby disapparated with Harry, Ron, Hermione, and Griphook, Bellatrix threw her knife at him, killing him.

After the trio settled at Shell cottage after escaping Malfoy Manor, Hermione later disguised herself as Bellatrix to get into her vault in Gringotts, which was guarded by a dragon; Bellatrix never knew of this. Bellatrix Lestrange later participated in the Battle of Hogwarts alongside the other Death Eaters and Voldemort's army, where she murdered her estranged niece Nymphadora Tonks in battle. J.K. Rowling has officially confirmed Bellatrix as Nymphadora's killer, while in Harry Potter and the Deathly Hallows During the final battle, she was the last Death Eater standing excluding Voldemort in the book, but in the film she is not. She was only fighting Ginny instead of fighting also Luna Lovegood and Hermione Granger. She tries to cast a Killing Curse on Ginny, but fails and only enticing Molly Weasley's fury. Molly fights Bellatrix in a rage, and in the end, Molly emerges victorious. Bellatrix never thought that Molly would defeat and kill her and avenging Sirius, Tonks and Dobby also the muggles she had killed. In book version, this ultimately infuriated Voldemort to the point where he began to focus his rage on Molly until Harry, whom he revealed faked his death, came to interfere. She never lived to learn of Snape's true loyalties and to witness her beloved master's defeat and death.

In Harry Potter and The Cursed Child, it is revealed that through the affair between Voldemort and Bellatrix, the female child was born later named Delphini. Despite her immense malice and hatred, she geuinely loved and was fanatically obsessed with Voldemort, her Dark Lord and master. After she learned that she was the daughter of the Dark Lord and Bellatrix, Delphini believed that Voldemort should have succeeded in his goal to conquer the world. So, she sought to use a Time Turner to alter the past to Voldemort's victory.

Coincidently, Albus Severus Potter (Harry Potter's son) and Scorpius Malfoy (Draco Malfoy's son) possessed one as well which they previously used to alter the past so they can improve their reputations in the current timeline, but decided to undo everything what they did. As the consequences of their action resulted in the creation of two alternative realities, with the first seeing Hermione as the bitter Defence Against the Dark Arts teacher while Ron was in a less happy marriage to Padma Patil, and the second seeing a world where Voldemort and the Death Eaters ruled the Wizarding world while the Order of the Phoenix and Dumbledore's Army lost the Battle of Hogwarts, as well as the death of Harry Potter at the hands of Voldemort.

After many attempts, including Albus being erased by their changes, Scorpius managed to restore the correct timeline, and decided to destroy Time-Turner on their own, not trusting the Ministry to destroy it. She blackmailed them to get the Time Turner for herself and have them helplessly watch as she altered the course of history so the second reality that the boys previously created would come true. Fortunately, Harry, Ginny, Draco, Ron, and Hermione, who learned about Delphini's plans, showed up and foiled her plans, saving the boys, and duelling and defeating her, with Delphini being later imprisoned in Azkaban for murder. 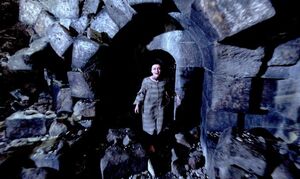 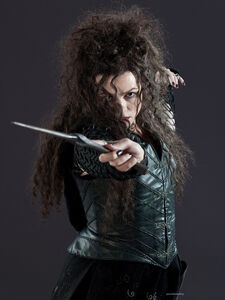 Promotional picture of Bellatrix for Harry Potter and the Deathly Hallows, Part 1. 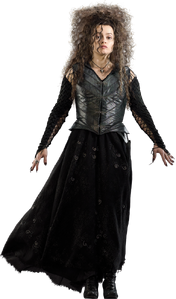 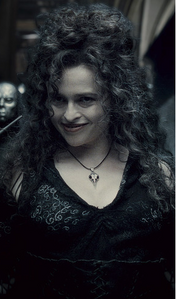 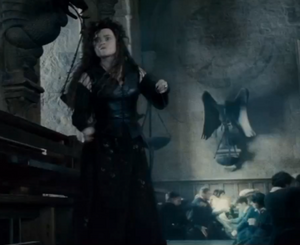 Bellatrix's demise.
Add a photo to this gallery

Retrieved from "https://villains.fandom.com/wiki/Bellatrix_Lestrange?oldid=3454941"
Community content is available under CC-BY-SA unless otherwise noted.