Find a way out through the Maze with Minho.

Ben is a minor antagonist in The Maze Runner series.

Ben's a runner who went through the Changing, and was later banished for attempting to kill Thomas. Ben is only described as being pale and having rope sized green veins coming out his face, because of "The Changing". He is most likely named after Benjamin Franklin.

Ben was first introduced as he was going through the Changing, when Thomas walked in on it. During, he regained memories of Thomas and, according to Ben, it was enough to make him want Thomas dead.

After recovering from The Changing, Ben goes crazy and attempts to murder Thomas after he wandered off into the Deadheads. Ben says "He is evil!" And Alby tells him to stand down, but Ben does not. Alby prevented the murder by shooting him with a bow.

The arrow lands in his cheek, and Thomas assumes that the boy was dead. This is later proved to be incorrect, as Chuck later tells Thomas that the arrow missed Ben's brain, and he has been healed by the Med-jacks. Ben begs for mercy and blames it on The Changing that was controlling him.

He was most likely killed anyway, however, as shortly afterwards, Ben is banished to The Maze, with the use of a metal pole with a rope that was tied around his neck collar, where the Grievers most likely killed him, though it's never mentioned what happened to him. Thomas and Minho later found remains of Ben's clothing near the blades.

In the movie, Ben attacks Thomas in the forest, due to being stung by a Griever, but Thomas hits Ben in the head with a skull and flees. Everyone heard some screaming. When they see Ben attacking Thomas, Newt hits him in the head with a shovel. When Alby found out, he requested some Gladers to pull up his shirt.

Ending him up at the Pit, Ben was banished soon after. When Thomas and Minho went to Section 7, they found remains of Ben's clothing, confirming his death. 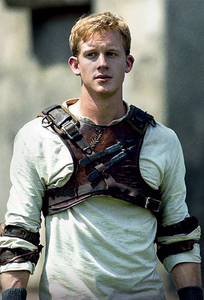 Ben before the Changing. 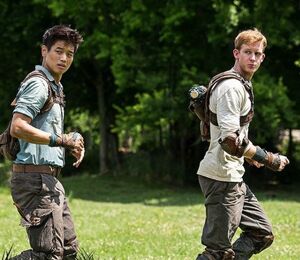 Ben about to attack Thomas.

Ben about to be banished. 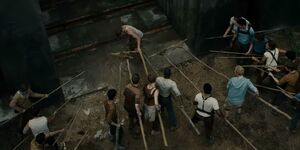