Ben is a character-turned antagonist from The Walking Dead comic book series and a supporting antagonist of season 3 in the AMC's show. He serves as a supporting character until sixtith issue, later acts as the main antagonist/anti-villain in sixty-first issue.

When the apocalypse started, Ben is a four years old kid. He has a father named Allen, a mother named Donna and a twin brother named Billy. When they heard that a safe zone is being established in Atlanta, they traveled for Atlanta. However, they find out Atlanta is infested by zombies. Later, they met other Atlanta survivors and they began to live together.

In the events, Ben and Billy lost their many friends, eventually their mother and father. Later, they were adapted by Dale and Andrea.

After the events, Ben begins to act the psychopathic actions. Even though he is playing with Carl Grimes, Sophia and his brother Billy, actually, he is teasing and rough-housing with them.

One day, Billy sees Ben while he is poking the carcass of a cat. Later, Ben forces Billy to remain silent about this incident. It is been understood Ben killed the cat.

Days later, Ben stabs his brother, Billy, with a knife and murdered him. Later, he tells to Andrea about no matter how humans died, they will always come back. Later, the group locked Ben in a van and debates about killing or incapacitating him. However, Carl Grimes sneaks into the van and executes Ben. Eventually, Billy and Ben are buried together.

Ben first appears fighting off walkers in the woods alongside his mother, Donna, and father, Allen, accompanied by Sasha Williams and her brother, Tyreese, who are looking for safe ground. As they prepare to flee, his mother, Donna, is bitten on the arm by a walker, devastating Allen, who aids her out of the woods with the others. They come upon a collapsed portion of the West Georgia Correctional Facility and enter, knowing it is too dangerous to be anywhere else. Sasha feels they should kill Donna before entering the prison, fearing she will reanimate while they are inside, but Allen pleads with Tyreese to spare her for now, not wanting Ben to witness his mother's death. Tyreese convinces Sasha that they should let her live for a while longer and they proceed into the prison. While inside they face a small horde of walkers, and Donna, who is in severe pain, begins to die in Allen's arms while Ben, Tyreese, and Sasha try to clear out the room. They are then helped by a young boy, Carl Grimes, who is able to clear out the room and lead them to the other survivors. Carl tells them to leave Donna, who has died, but Allen tearfully refuses. Tyreese then offers to carry her as Carl leads them into a cell and locks them in. Tyreese uses a handkerchief to cover Donna's face as he prepares to kill her before she turns. Allen and Ben then mourn over her death.

He is seen with his father, attempting to convince Tyreese and Sasha to assist with killing the people in Carl's group and taking their weapons along with the prison, fearing that they will be kicked out once the other group members return. He is later seen with the rest of the group as Tyreese tries to convince Rick let them stay with them, when they are all indirectly kicked out of the prison by a hallucinating Rick Grimes.

Ben appears along with the rest of Tyreese's group in the woods where Milton and Andrea are. Milton escorts them back to Woodbury, and Ben is willing to retaliate against Rick's group when they talk to the Governor, telling him that they are in if assistance in dealing with them is needed.

Ben is first seen with his father, Allen, helping Martinez and Shumpert load weapons up into a truck, including a .50 Caliber Machine Gun. Later, he is present when Allen and Tyreese begin to fight about Tyreese saving Donna's life and Donna's supposed attachment to Tyreese after that.

While Martinez, Shumpert, Tyreese, Allen, Sasha, and himself go help to pick up biters from the pit, Ben witnesses Allen and Tyreese having another argument because Tyreese refuses to help wrangle biters so people can be fed to them. Allen gets angry, and says he isn't going back out on the road, and that he needs to look out for his boy. "Like you looked out for Donna?" Tyreese sneered.

Allen attacked Tyreese at that moment and Ben tried to intervene, insisting Tyreese leave his father alone, but he is easily pushed back by Tyreese's immense strength. He is later seen when The Governor comes to talk to the group about the pit fight and the burning of the biters.

He participates in the shootout against Merle Dixon and steps in front of The Governor just as Merle fires a shot at him, accidentally hitting and killing Ben instead. Later, his corpse is stumbled upon by Merle's brother Daryl, being eaten by a zombified Merle. 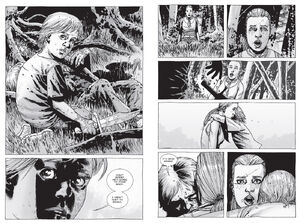 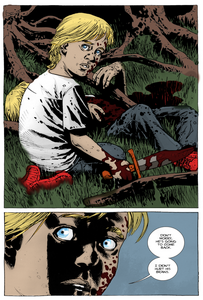 A colorized version of Billy's death. 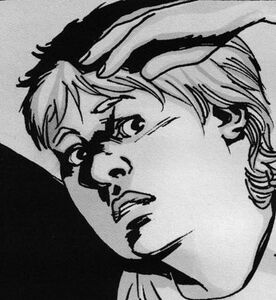 Ben, shortly before his death. 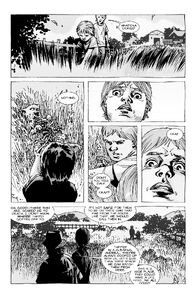 Ben poking with the carcass of a cat.