He was voiced by the late Nestor Paiva.

Despite his name he resembles more of a vulture and wears a worn out hat and vest.

He may seem first as being nice and friendly but as the short film process, his true nature as a greedy and sneaky con-artist is revealed, wanting to earn money to make Donald crash by sabotage. As he repeatedly fails, he goes more mad and murderous as he plans to kill Donald by setting the gas on fire.

As the owner of a wrecked plane junkyard, he disguised it as a place of used planes. He plans to sabotage the plane Donald brought and flying to collect on a forged insurance policy if he crashes. But he fails as he gets outsmarted by the duck and eventually he is used as a plane by Donald. He was likely sent to prison for his crimes. 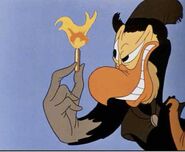 Ben preparing to set the gas on fire.
Add a photo to this gallery
Retrieved from "https://villains.fandom.com/wiki/Ben_Buzzard?oldid=3526109"
Community content is available under CC-BY-SA unless otherwise noted.