To ressurrect his evil ancestor and to rule the world.

Ben Ravencroft is the main antagonist in the movie Scooby-Doo and the Witch's Ghost alongside his evil ancestor Sarah Ravencroft.

He is voiced by Tim Curry.

Ben Ravencroft is a famous horror writer whose ancestor was an evil witch whose soul had been imprisoned centuries ago. He attempted to bring her back from the dead in order to become all-powerful, and to rule the world.

He ultimately failed because his ancestor Sarah prefers to punish the world simply by destruction rather then enslavement of it, and ended up getting trapped inside his own book of witchcraft along with her. 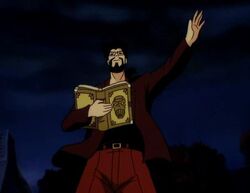 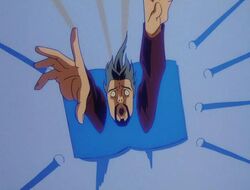 The demise of Ben Ravencroft.
Add a photo to this gallery

Retrieved from "https://villains.fandom.com/wiki/Ben_Ravencroft?oldid=897991"
Community content is available under CC-BY-SA unless otherwise noted.