Agility
Pyrokinesis via the fire totem

Collect all the Zambesi Totems and use them to seek dominance over all things.

He is a former warlord and later Zambesi ambassador who sought the Totems of Zambesi. He is also the one responsible for the annihilation of the Zambesi Village, the home of Amaya Jiwe, Kuasa and his arch-nemesis Mari McCabe.

He was voiced by Hakeem Kae-Kazim, who also played Georges Rutaganda in Hotel Rwanda, Waraabe in Call of Duty: Modern Warfare 3, Richard Gladwell in Gotham and Krogan and Drago Bludvist in Dragon: Race to the Edge.

In the past, Eshu was a ruthless military general in Africa who desired the Totems of Zambesi. Upon learning that the totems were located in a small Zambesi village, Eshu led a raid on the village, massacring its residents and animals in an attempt to locate the totems. During his raid, Eshu came across a woman who possessed the Anansi Totem, which allowed the user to gain the powers of the animal kingdom. Eshu fought the woman and managed to gravely injure her. Despite this, she survived and managed to flee with her infant daughter.

Many years later, Eshu arrived in Detroit posing as an ambassador, where he continued his search for the totems. Bribing a collector, Jones, into stealing the Fire Totem for him, Eshu promptly killed Jones and took the Fire Totem for himself. It was then that he met Mari McCabe, who he recognized as the daughter of the woman he had faced so many years ago. Mari now had the Anansi Totem in her possession, and used it to battle Eshu. However, with the Fire Totem's power, Eshu proved a difficult opponent. The battle ultimately ended in a stand-still, and Eshu left.

Renouncing his ambassador status, Eshu used the Fire Totem to go on a city-wide rampage, burning a massive portion of the city to the ground and demanding that Mari come out and face him. Mari, assisted by her sister Kuasa, the Atom and Black Canary, fought Eshu on the streets, but he soon overpowered the heroes and managed to kill Kuasa, leaving Mari alone to face him. Their fight brought them to the harbor, where Mari managed to steal the Fire Totem from Eshu. As Eshu attempted to continue the fight, he was knocked out by a kick from Mari, sending him sinking into the depths of sea and presumably drowning.

Despite Eshu's defeat, his actions had an impact on Mari's family. After learning about the destruction of her village, Amaya Jiwe was conflicted about whether or not she should do something to change her family's fate, not wanting to ruining Mari's superhero career. Kuasa was also revived by Nora Darhk under the command of the time demon Mallus, who offered her power to save her village in exchange for her services.

In the climax of Mallus' escape from his dimension, the village was saved thanks to the intervention of the Legends who had defeated after he murdered a majority of Eshu's soldiers (possibly including Eshu himself), thus preventing his destructive rampage from ever happening. The events had also resulted in both Mari and Kuasa sharing the Vixen title and the powers of the Anansi Totem. 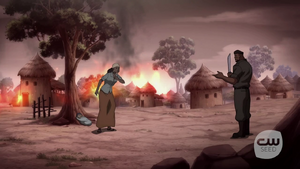 Eshu confronted by Esi during the village attack. 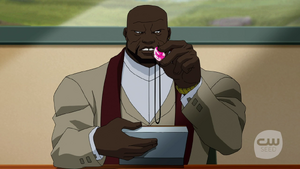 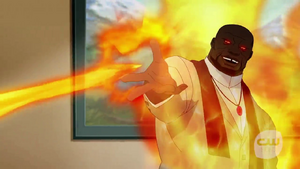 Eshu's evil grin upon using his powers to kill Jones. 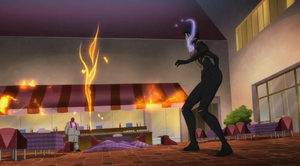 Eshu facing off against Vixen. 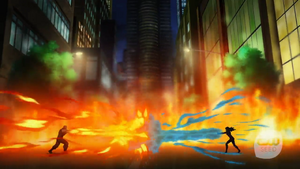