Entertaining the audience of his cartoons.

Chase down Henry (succeeded).
To save Boris from “Alice” (possibly/ongoing).

Bendy, and his possible physical form Ink Bendy (unofficial), is the titular main antagonist in the 2017 horror videogame Bendy and the Ink Machine. A cartoon devil created by Joey Drew and Henry for their cartoon, Bendy was then brought to life susceptibly by the Ink Machine.

Meanwhile, Ink Bendy is a malformed ink humanoid version of Bendy, thought to be made by the Ink Machine.

Bendy resembles that of an old-fashioned cartoon character: having a black and white color scheme, cartoonish gloves, and a cheerful-looking expression (which apparently never changes). In addition to this, the top of his head resembles cartoony "horns", he wears a white bowtie, and sports black shoes. His eyes are in a pie-cut style, resembling that of an old, 1920's cartoon character.

Ink Bendy is an ink character similar to the original Bendy, except that he himself has a huge humanoid shape, his face is covered with dripping ink, has a large left arm and a small right arm. His left hand appears to have a glove, whilst his right hand appears to have a glove "painted" on it. His bowtie is also crooked on his body, being more in the center of his chest rather than the top. His right foot appears more claw-like, while his left foot appears to just be a blob. This form is also notably taller than Henry.

While not outright stated and not physically appearing in the game, it can be assumed that Bendy could be evil, given to the fact that he is an antagonist. Indeed, while his appearance would suggest a happy-go-lucky and enthusiastic character reminiscent of 1920's Mickey Mouse cartoons, clues throughout the game seem to suggest a darker nature. It is clear that satanic practices were used in his creation. He seems to be viewed by Sammy as a type of deity, and he is possibly some form of supernatural being.

Unlike his original, Ink Bendy is hostile, dangerous, destructive, and possibly homicidal, as he first killed Sammy and then tried to kill Henry next.

Bendy first appeared in the first chapter, although as a cardboard cutout. Several of these can be seen throughout the Workshop (the setting in the game). Some of these cutouts appear to move on their own, especially the one that pops up near the theatre room, and the other appearing behind Henry in a hallway.

Bendy also appears on multiple posters throughout the workshop, and sticker-like objects on the wall and desks. Several sketches of the character also appears on some desks, especially one of his head with a sticky note reading "NO" on it. After Henry collects all six items, Bendy appears on a projection in the theatre room.

After Henry activates the Ink Machine, the entrance to the Ink Machine's room is suddenly boarded up. Upon getting closer, Ink Bendy will burst from the boards, attempting to grab Henry while screeching. After seemingly failing, Ink Bendy retreats back into the Ink Machine room, whilst the hallway that Henry is in begins to fill with ink.

Ink Bendy can be seen again when in the Pentagram Room. He appears for a split second in two flashbacks, along with a Wheelchair and the Ink Machine, before Henry passes out.

Bendy reappears again in Chapter 2, again as a cardboard cutout. However, these cutouts can be destroyed by Henry with an axe. Some cutouts, especially ones in front of a pentagram, reappear when Henry turns his back on them, seemingly untouched.

Bendy also appears as sketches, drawings, and "stickers" throughout the music department, both on desks and on walls.

Near the end, Sammy Lawrence summoned Ink Bendy in an attempt to sacrifice Henry and appease him, hoping that Bendy would free him from his Ink-covered body. However, Bendy seems to kill Sammy instead, although this is unofficial because the death happens off-screen.This gives Henry time to escape. Near the exit, Ink Bendy will suddenly popup in front of Henry, blocking the exit. Forced to find another way out, Henry is then forced to run from Ink Bendy, until he reaches the vault. Having blocked the door, Henry is seemingly safe from Ink Bendy.

Bendy appears once again in Chapter 3. Though he is only the Bigger Bad in this Chapter (the main antagonist is Alice Angel), he is the most dangerous enemy and Henry is forced to hide from him in order to escape Bendy. Alice seems to despise and even fear him and his ink.

Bendy is able to teleport to Henry by warping through the walls if he lingers for too long in an area. Henry can avoid him by hiding in one of the Little Miracle Stations, after which he will see Bendy lumbering past him before disappearing into another wall. Henry may also escape him by returning to the elevator before he is caught. Bendy cannot be hurt, let alone killed, by any of Henry's weapons, including the Tommy Gun which has the ability to kill the Projectionist in seconds. Alice also mentions that Bendy hates it when his cardboard cutouts are destroyed, and after Henry destroys them, Bendy chases him down once again.

At the end of the Chapter, if Henry chose the Demon path earlier, the post-credits image shows Bendy in the doorway with a Searcher and several Butcher Gang members, implying that he is raising a mass army of ink creatures. 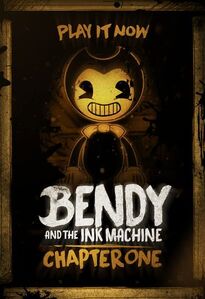 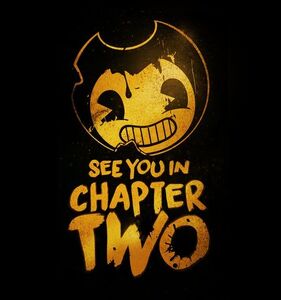 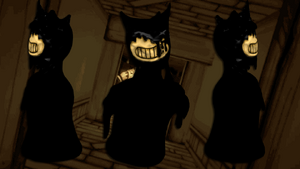 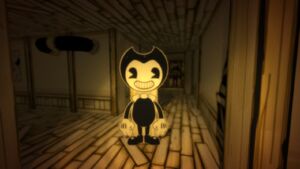 A Bendy cutout appearing behind Henry. 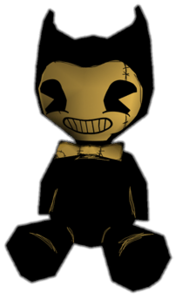 A Bendy doll, appearing in Chapter 1.

A Bendy cutout in front of a pentagram. 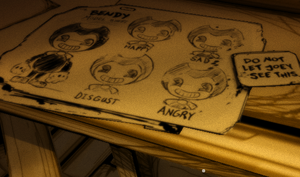 A Bendy cutout peaking around the corner. 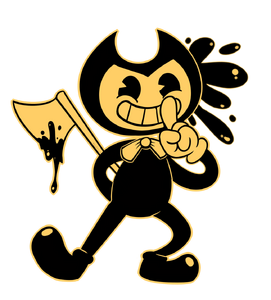 Ink Bendy when he first appears in Chapter Two

Ink Bendy as it appears in Chapter Three

many bendys
Add a photo to this gallery

Retrieved from "https://villains.fandom.com/wiki/Bendy_(Bendy_and_the_Ink_Machine)?oldid=2464248"
Community content is available under CC-BY-SA unless otherwise noted.