Sodomizing Midori with her snakes.
Torturing Midori.
Attempting to seduce Mr. Arashi.
Having threesomes with Muchisute and Akaza.
Doing chores.

Seduce Mr. Arashi into being her lover to get money. (failed)

Benitsu is a major antagonist of the 1984 manga Shoujo Tsubaki and it's 1992 anime adaption Midori. She is a perverted zoophile who abuses Midori alongside her fellow circus freaks as well as sodomizing her with her snakes and eels which causes her to become sick.

She was voiced by Sanae Katô in the anime adaption.

Benitsu is next seen ordering Midori to bathe and clean the disabled circus freaks, who takes advantage of the situation to try to force Midori into pleasuring them. She runs away in horror and bumps into Benitsu, Muchisute, Akaza, and Kanabun. Benitsu would "punish" Midori by stripping her naked, tying her up with a rope and beating her with a cane as the rest watches. The next day, out of nowhere, Benitsu decides to use her voodoo powers to painfully twist and conjoint Midori as she laughs alongside Muchisute, Akaza and Kanabun. Benitsu would proceed to taunt and discourage Midori before pulling down her panties and sliding a snake into her anus causing her to scream in agony.

As a result, Midori becomes sick and is bed ridden. Benitsu would soon attempt to seduce Mr. Arashi in hopes of starting relationship with him to get money but is turned down. Mr. Arashi would go on to steal all the earnings and leave the circus. Benitsu is then seen alongside Akaza waving goodbye to Midori with Masamitsu. She is last seen in a vision alongside his fellow circus freaks sitting on a stairwell, laughing at Midori after Masamitsu's been murdered. She attacks them only for Benitsu and the rest to vanish as their laughter echoes.

Benitsu is a perverted sadist and is abnormally hedonistic as she prefers having sex with snakes and circus freaks. She is also sadistic and she enjoys tormenting and sodomizing Midori for her won gratification. However, she does soften up to Midori at times and defends her from Muchisute whenever he tries to abuse her for no reason. However, it is far outclassed by her vile nature.

Benitsu and everyone laughing as Midori is tortured. 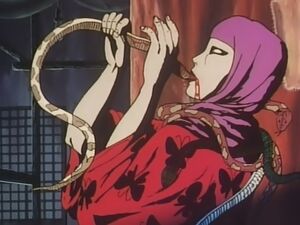 Benitsu performing a gruesome trick with her snake for her performance. 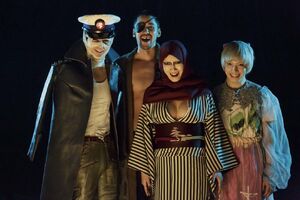