Member of the MBI Discipline Squad

Wrathful Rival
Benitsubasa is one of the main antagonists in the manga/anime series Sekirei. She is Sekirei #105 and is known as the Red Sekirei. She is a member of the third generation discipline squad and has a bitter grudge against Musubi.

She is voiced by Shizuka Itō in the Japanese version of the anime and Trina Nishimura in the English version, both of whom also voice Rachel and Ellen Mira Mathers.

Benitsubasa is a member of MBI's discipline squad and is most of the time teamed up with Haihane. Their job is to punish everyone who breaks the rules of the sekirei plan but they also break rules from time to time.

Benitsubasa is very short-tempered, cantankerous, and disagreeable, so she is very easy to upset. Haihane makes often jokes about her small boobs and the fact that her Ashikabi is gay, which makes her extremely annoyed as she loves Natsuo and is very sensitive about her chest. She is also very aggressive and sometimes a little crazy, frequently resorting to violence as soon as things stop going her way.

She has a lot of speed and is a fist type. That means she is a hand-to-hand combat fighter. 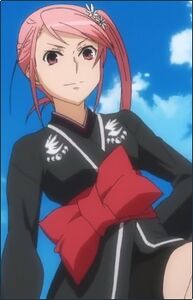 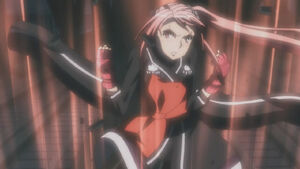 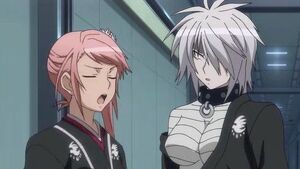 Add a photo to this gallery
Retrieved from "https://villains.fandom.com/wiki/Benitsubasa?oldid=4210169"
Community content is available under CC-BY-SA unless otherwise noted.