The Adventures of Captain Underpants

Causing the suffering of children (as Mr. Krupp)

Saving the world (as Captain Underpants).

Catch George and Harold red handed for their pranks and punish them severely (formerly).

Separate George and Harold for their prank again, change him to Captain Underpants, and bringing him to the carnival (temporally succeeded, formerly).

Principal Benjamin "Benny" Krupp (also known as Mr. Krupp) is the secondary antagonist of the Captain Underpants series. He is the overweight, middle-aged, grumpy principal of Jerome Horwitz Elementary and the alter-ego of the superhero Captain Underpants.

However, his personality is completely polar as Captain Underpants. He's kind, jolly, loyal yet dim witted. Still he saves the day and is loyal to his sidekicks George and Harold.

Role in the books

One day, after George and Harold ruined a big football game, they were reported to Mr. Krupp's office the next day. Mr. Krupp showed them their pranks on tape and wanted to find out who was responsible for the fiasco. George and Harold pleaded that they did not want to be killed for the rest of their lives, so Mr. Krupp (who put up with them for years) blackmailed the two boys to do his chores and not smile or he will threaten to give the tape to the football team, essentially using them for child labor. He even sadistically asked their teachers to give them extra homework.

They proceeded to get Krupp to do ridiculous acts, culminating in making him believe he was their comic book creation, Captain Underpants. After pursuing Captain Underpants throughout the city and helping him defeat the villain Dr. Diaper, George and Harold managed to revert Krupp to normal by pouring water on his head before Krupp angrily tells the boys that he is going to give the tape to the football team. However, this had the side-effect of Krupp always transforming into Captain Underpants every time he hears someone snap their fingers.

In the film, Mr. Krupp is bent on busting George and Harold of their multiple pranks they had done to him and the other staff, though he finds it upsetting that he hasn't gotten any evidence to have them punished. He also hates their Captain Underpants comics as he forbids them from creating any in the school grounds, even tearing up their latest one detailing the origins of the superhero, much to their horror.

George and Harold's pranks come to an apparent end after they tamper with a toilet invention called the Turbo Toilet 2000 made by the school's local snitch Melvin Sneedly. With that in mind, Krupp happily decides to place George and Harold in separate classes in order to annihilate their friendship and their pranks. But before Krupp could fill up the paperwork to make it happen, George hypnotizes Krupp with a 3D Hypno-Ring he received out of a cereal box; the boys see that Krupp bears a resemblance to Captain Underpants without his toupee and command him to be Captain Underpants. However, this quickly backfires when Captain Underpants begins causing some problems around Piqua, thinking he is a real superhero with superpowers.

The boys discover that they can turn Captain Underpants back into Krupp by splashing water on him and can turn him back by snapping their fingers. Believing that Krupp will continue with his plan to separate them, they decide to settle with Captain Underpants but insist that he be dressed up as Krupp under the pretense of a secret identity, to which Captain Underpants agrees. His sudden personality change even manages to attract the attention and affection of the school's shy lunch lady Edith. The boys even learn (after exploring his house) that Krupp might not be as evil as they thought, but has rather been lonely for most of his life. Eventually, Krupp turns back into himself after a rainstorm occurred, learning that George and Harold have started a fair at the school without his knowledge. Having enough of their antics, Krupp angrily sentences the two boys to separate classes, much to their discomfort. Despite being satisfied that he finally punished the boys as promised, Krupp finds himself moping in boredom after looking at the casserole that Edith made for him, feeling so depressed that he never got a chance to ask her out on a date.

However, the toxic waste from the Turbo Toilet 2000 transforms all the toilets into an army of Talking Toilets which attack the restaurant at which Mr. Krupp and Edith are dining. Upon snapping his fingers while calling for a check after seeing a toilet eating up a citizen in horror, Mr. Krupp once again becomes Captain Underpants, carrying George and Harold away to help him fight the Talking Toilets, which confuses George, as he thought destroying the ring would destroy the hypnotism. 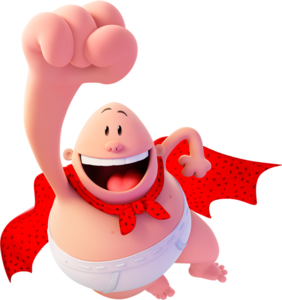 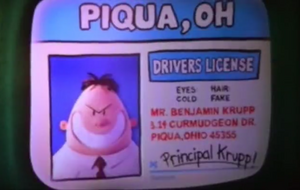 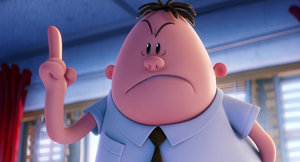 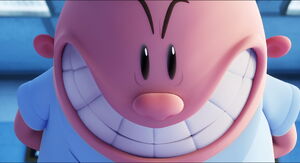 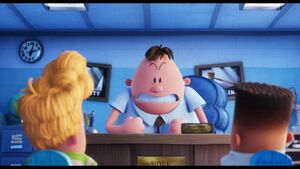 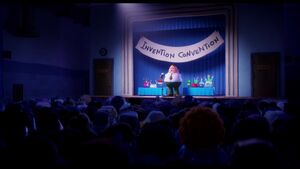 "GEORGE! HAROLD!!!" Mr Krupp villainous breakdown before George is about to snap his fingers again. 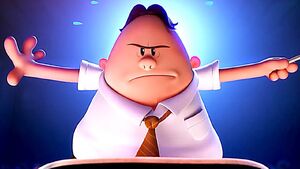 Mr. Krupp as Captain Underpants conducting a musical number for the kids 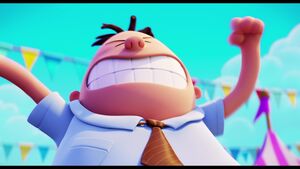 "What is this, a carnival? I hate carnivals!" 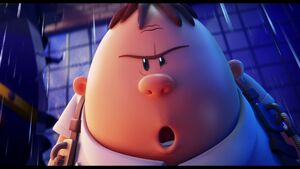 "You... You two. Your friendship... is... no more." Krupp about to separate George and Harold. 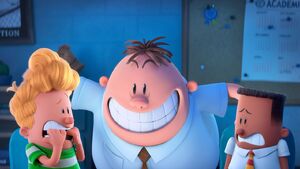 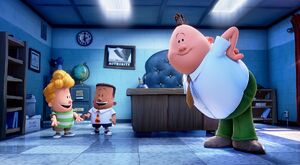 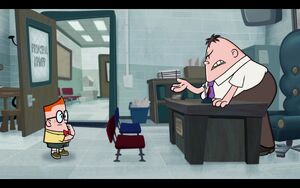 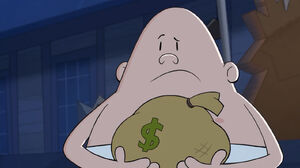 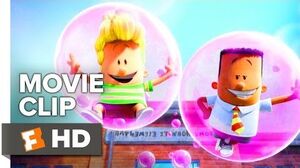 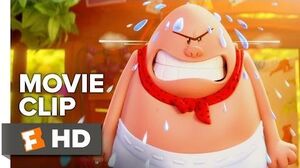