Performing experiments behind the ICA's back

He was voiced by the late Powers Boothe, who also played Gorilla Grodd in the DC Animated Universe, Ethan Roark in Sin City, Curly Bill Brocius in Tombstone, Joshua Foss in Sudden Death, Gideon Malick in Marvel's Agents of S.H.I.E.L.D., Roland Kane in Turok, and Cash Bailey in Extreme Prejudice.

Benjamin Alexander Travis was born on January 8, 1965 somewhere in the United States to Mary Lucille Travis (born 1947, currently resides in New York City), and an unknown father. He grew up poor in or around Barlow, Kentucky. He never married, and lived between apartments in the Americas, Europe and Southeast Asia.

He joined the U.S. Marine Corps as a young man, and was the youngest Force Reconnaissance recruit in history, as well as the only one of "a handful" of candidates to be permitted to apply without active service prerequisites. For his service in Operation Desert Storm, he was awarded a Bronze Star by then-president George H. W. Bush. He also fought in Operation Deny Flight in Bosnia, 1994. Shortly after, he was dishonorably discharged for conducting several unauthorized operations.

The ICA first referred him in September 1995, while he was on trial - his sentence was waived after ICA blackmailed one of his superiors with pictures of him at a strip club. They continued a thorough scouting of him until they decided to hire him in December 1999. He trained at Field Office 1, scored a 98 on initial BHL/A testing and scored in the 99th percentile of most intellectual metrics (except emotional intelligence). His psychological health was a grave concern of the ICA's before they hired him, saying "one stressor may be enough to trigger an episode". During an inkblot test, he became offended and failed the test by giving sarcastic answers.

Despite these concerns, he began working for ICA in February 2001. The ICA commends him as one who "Navigates and manipulates the theater of conflict, with a natural flair", one example being a car bombing he did on behalf of the Sinaloa Cartel in Mexico.

He was appointed to the ICA Tech Board in April 2006, where he was "architect of numerous agency programs and initiatives". He was promoted to ranks Gamma in July 2007, Delta in January 2008 and Tetra in December 2008. The review board who promoted him to Tetra included D. Bacon, G. Andrews, C. Levin, S. King and H. Jackson. As the ICA gained more confidence in him, they stopped his ongoing psychological monitoring (though it may have started again at a later time).

Travis is a high level official within the ICA, and he became Agent 47's new handler when his predecessor, Diana Burnwood, betrayed the organization. As a result, he ordered him to kill her and retrieve a teenage girl named Victoria. Victoria, like 47, was genetically-engineered to become an assassin for ICA. It is due to not wanting her to suffer the same fate like him and got Diana betray the Agency. 47 has decided to protect Victoria, which causes Travis to brand him a traitor.

He sent the ICA tactical teams to kill 47. He even sent the Saints to do so, but they failed. He goes with his assistant Jade Nguyen to Chicago to exchange $10 million for Victoria's release. Much to his chagrin, this plan backfires when Blake Dexter takes the money, leaving Travis nothing.

After 47 rescued Victoria from Dexter, Travis and his assistant, Jade Nguyen, went to a cemetery at England due to his suspicions that Diana might not be dead. From there, 47 is given an order to kill him under her orders. After eliminating his assistant and elite bodyguards, 47 confronts Travis inside a church after injuring him with an explosion. Travis asks 47 if he really did kill Diana, to which the hitman responds, "You will never know" before killing him with the final shot. 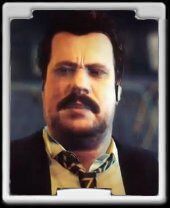 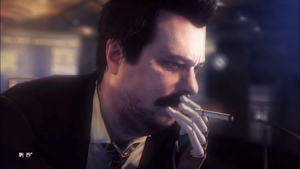 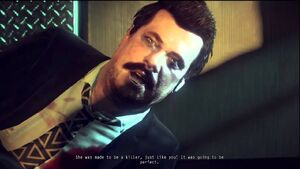