To continue his killing spree with Errol (failed).

Undead Snuff Filmer
Benton Tarantella is a minor antagonist from Courage the Cowardly Dog. He is a Revenant.

He was voiced by the late Peter Fernandez.

Everyone Wants to Direct

He arrived at the Bagge farm claiming he wanted to film there. Courage grew suspicious of him and checked his computer to see if he really was a director.

Courage learned that he was a former serial killer who, with help from his partner Errol, posed as an amateur filmmaker wanting to direct in his victims' homes. After they let the two in, they would kill them. The two killed a dozen people before they were arrested. Errol was released from prison for good behavior, but Benton died in prison.

Errol himself died of unknown causes sometime later, and was buried in a cemetery that the farm was built over. But now Benton has somehow come back to life as a zombie (how is never revealed) and come to the farm. He plans to bring Errol back to life so they could continue their killing spree, starting with the owners of the farm.

Benton would get Eustace to dig a pit leading to Errol's grave and wait for the planets to align and shine light into Errol's grave. Then after Errol came back they would eat Muriel (who thought she was playing a human victim and had no idea the whole thing was real) and then move onto Eustace and Courage.

When Courage arrives to warn everyone, Benton locks him in a trunk. Courage then manages to rewrite the script so that Benton lets him out, then he and Errol goes back into the pit.

In his final appearance, he was planning to make a show about people being mean to each other. He comes across the Bagges and asks them to be in the show because of Eustace's mean ways. He eventually makes the show entirely about Eustace and an even meaner clone of his essence named Mr. Nasty, who insults and humiliates Courage and Muriel. Benton and Mr. Nasty are defeated when Courage pretends to be meaner than Mr. Nasty so Benton will fire him and make Courage the new star. After Mr. Nasty leaves, Courage knocks Benton into a pit of quicksand to sink. 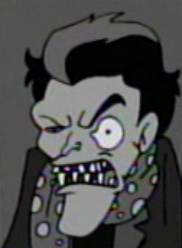 Benton as a human.