Man-eating Monsters
Beowolves are large, dark werewolf-like creatures of Grimm from the ongoing American web cartoon series RWBY, as well as its Japanese manga adaptation/prequel, video game, and board game.

Beowolves resemble the traditional, bipedal forms of lycanthropes, more commonly known as werewolves. They stand on their hind legs, albeit with a slouch, and are extremely muscular. They have pitch-black fur and red eyes. On their face is a bone-like mask with red markings, and they have bone spikes protruding from their arms, back, and knees. Their fingers and toes are tipped with long, sharp, white claws.

They appear to have protrusions made of bone along their back and arms. They have long, sharp claws, with which they lunge at Ruby Rose during the "Red" Trailer. They have enough strength to knock back Ruby with a swiping motion.

Just like the Ursai, Beowolves can vary greatly in size. The average Beowolf is about the size of a normal human, but as they age, they can grow to be more than twice the height of a human.

The Alpha Beowolf is covered in more bone-like armor and spines and first appears in "Battle of Beacon". It has a more angular skull, larger teeth and sharp triangular ears.

Beowolves living in the tundras of Solitas (referred to as Ice Beowolves) have their bone plating covered by thick layers of ice as well as snow covering their fur.

In RWBY: Grimm Eclipse, Team RWBY encounters mutant Beowolves in Forever Fall forest, at a Grimm holding facility. These Beowolves are even larger than Alphas, glowing with a green color and are capable of firing a line of spikes that fire up through the ground as a medium-ranged attack.

In the "Red" Trailer, Beowolves confront Ruby as she is walking through the Cliffside Forest. They rush at Ruby, but she dodges and unsheathes her weapon, Crescent Rose, and begins to attack them.

After firing a few bullets, Ruby fully activates Crescent Rose so that she can use its scythe function to strike back at the Beowolves in a series of vicious attacks. Eventually, one Beowolf puts Ruby on the defensive, but only temporarily, as Ruby switches ammo and quickly goes back on the offensive, finishing off the remaining Beowolves.

In "The Emerald Forest", Beowolves appear in the Emerald Forest as Ruby and Weiss Schnee walk through it. Weiss, separated from Ruby, prepares to attack the largest Beowolf of the pack. However, Ruby suddenly reappears and hits it with her scythe, though it blocks her strike. This causes Weiss to misfire when she moves to stop herself from hitting Ruby, resulting in a small forest fire being started. This distracts Ruby long enough for the Beowolf she had initially attacked to hit her into Weiss. Ruby plans on continuing the fight with the Beowolves, but is forced by Weiss to flee when the fire spreads.

In "Search and Destroy", a Beowolf pack is encountered by Team RWBY and Bartholomew Oobleck. They serve as fodder, as Team RWBY proceeds to slay them all, while talking to Oobleck about why they wanted to be Huntresses.

In "Mountain Glenn", a lone Beowolf is seen briefly from the view of Ruby's weapon's scope. It scrounges around aimlessly; however, it is friendly towards Ruby, despite staring right at her.

In "No Brakes", Beowolves are among the many Grimm infesting the underground tunnels in Mountain Glenn, and were thus free to enter Vale when the barriers were destroyed by the crashing train.

In "Breach", the Beowolves that entered the city were dispatched by Teams RWBY, JNPR and CFVY, with help from the Atlesian military, Zwei, Doctor Oobleck, Peter Port, Glynda Goodwitch, Mercury Black and Emerald Sustrai.

Both normal and Alpha Beowolves are encountered as common wild enemies in Forever Fall, the Emerald Forest, and Mountain Glenn.

In Forever Fall, Team RWBY encounters genetically modified mutant Beowolves created by Dr. Merlot and his company, and realze that they must investigate the reasons behind these mutations and bring Merlot to justice.

In "Fall", Beowolves, Goliaths and Creeps sense negative emotions and turn their attention towards Vale. They walk through Mountain Glenn and closer to the city's border.

In "PvP", they begin to attack the city. Some Atlas Soldiers attempt to fend them off, but are overwhelmed.

In "Battle of Beacon", the stronger, armored variant, the Alpha Beowolf, makes an appearance for the first time at Amity Colosseum during the Grimm invasion of Vale. After easily destroying a pair of Atlesian Knight-200 androids, it attacks General James Ironwood, who manages to kill it after a brief fight with a shot through the skull from his revolver.

Another Alpha later appears at Beacon Academy, leaping from a crashing Bullhead. After it begins attacking escaping students, Blake goes to hunt it down.

In "The Next Step", Beowolves are born from Grimm pools.

The Beowolves are first shown in the "Red" Trailer as Ruby's opponents. They attack like a regular wolf would, with clawing and lunges, and no special skills or abilities demonstrated.

Their behavior varies depending on age. Younger Beowolves do not act like normal wolves, lacking any sense of self-preservation. They relentlessly attack no matter how hurt they are or how many of their pack members are slain. Older Beowolves gain a sense of self-preservation like normal wolves and eventually become more intelligent than them, observing their allies, retreating when needed and developing strategies for future encounters against Huntsmen and other threats.

They are extremely agile, as seen when they stalked Ruby through the Cliffside Forest, as well as in their subsequent fight with her.

A much more dangerous, armored version of the Beowolf appears in Battle of Beacon. This armored version was easily capable of destroying a pair of Atlesian Knight-200 androids, literally ripping them apart. Unlike the standard Beowolves which are easily dispatched in droves by trainee Huntsmen and Huntresses, this one was able to put up an intense (albeit brief) fight against Ironwood. 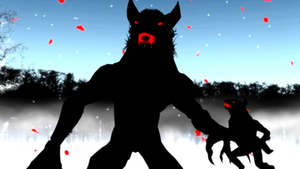 Beowolves in the "Red" Trailer. 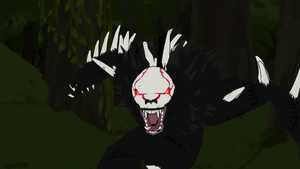 A Beowolf in the Emerald Forest. 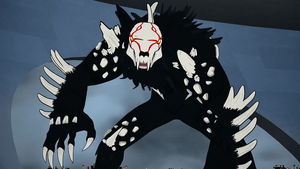 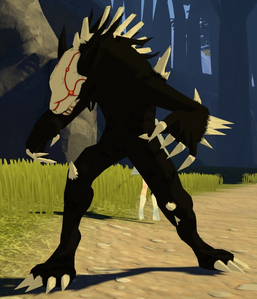 A Beowolf as seen in RWBY: Grimm Eclipse. 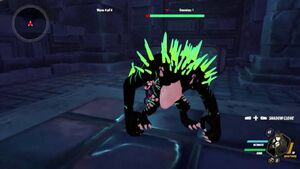 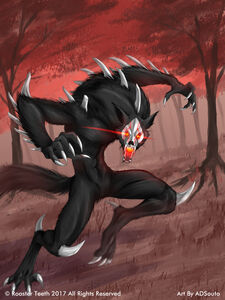 A Beowolf Grimm card for the board game RWBY: Combat Ready. 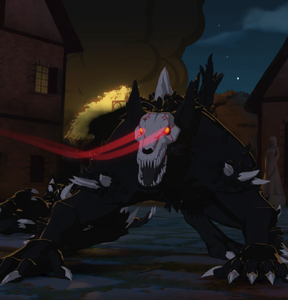 The Beowolves appearance from volume 4 onwards. 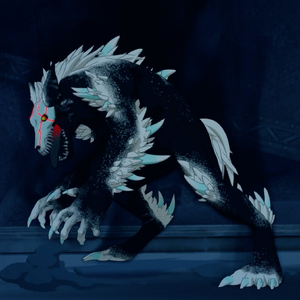 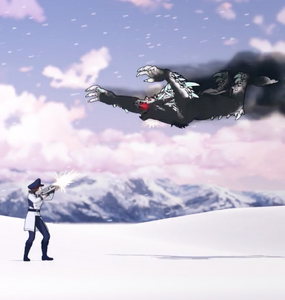 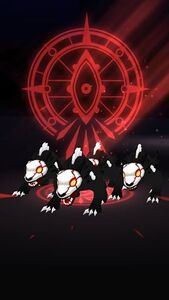 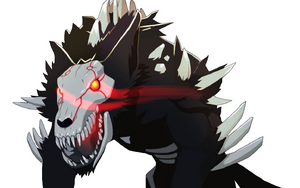 An Alpha Beowolf as it appears in RWBY: Amity Arena. 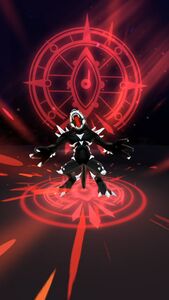