Helping Galactor to dominate the world.

Berg Katse, also known as Zoltar, is the second-in-command officer of Galactor, working directly under Sosai X and the central antagonist in Science Ninja Team Gatchaman. He appeared in every episode to carry out the plans of Galactor for world domination. He is later revealed to have been manipulated to join Galactor by X in order to become his pawn.

Berg Katse was created by the alien Leader X to lead the terrorist organization Galactor to take over the world. He is a mutant entity created through the fusion of fraternal twins while they were still in the womb. Because his component parts were male and female, Berg Katse had the ability to switch genders in almost every year in his life, forcing him to hide his identity until he could control it in his adulthood, becoming a master of disguise as a result. This ability led to him to be easily recruited and manipulated by Leader X when he contacted Katse and convinced him that they were a superior being.

Katse being composed of two people also enabled him to bear an exceptionally high IQ, although his intelligence was only displayed when he was a female student, as professors who taught his male form believed the boy to not be as intelligent.

Throughout the series, Katse takes on many disguises, both of men and women, and can easily shed them off. His unmasked appearance is revealed in episode 102, confirming that he is the same person as the mysterious female Galactor commander. Katse appears noticeably effeminate when unmasked, with long dark blond hair and grayish-blue eyes. These traits are also seen in the female commander form.

In his female form, Katse goes through a few different appearances, either wearing her hair up in a bun or in a long flowing ponytail.

Katse's design was somewhat updated and altered for the OVA. Instead of eye lenses on his mask, Katse has a blue visor. This mask also has pointed extensions protruding off of it, and squared-off ears. He wears a violet and red bodysuit, beneath layers of a white overcoat and deep purple cape.

His unmasked appearance is also feminine, though his hair is a much lighter blond.

Berg Katse is a master of disguise, having been switching between a man and woman for most of his life. He has the ablility to blend into environments of people and can fool everyone (even the most advanced technology).

Berg Katse, as a result of having a pair of brains fused together, has an IQ of 280 or higher. This allows him to formulate complex plans that would normally take years of consideration for the average person. In the field, he can command plans on the fly even when they go awry.

Berg Katse is a highly skilled fighter, able to fight against several enemies at once, even the whole Gatchaman team with all of their skills and equipment.

Katse commands a flying saucer where he command his troops. He is capable of piloting it in a manner that not even the God Phoenix can pursue it. 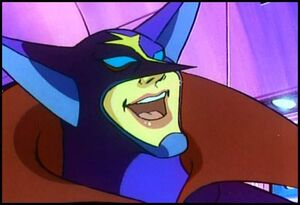 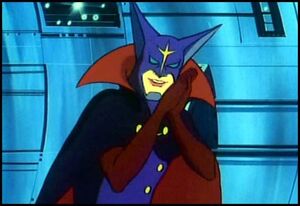