To destroy the earth.

Berg Katse is the main antagonist of Gatchaman Crowds. They are a mysterious androgynous alien who has caused chaos through their shapeshifting abilities and has brought about the destruction of several planets.

Berg is a tall, thin pale-skinned humanoid with razor sharp teeth, a prehensile tail and long, wavy dark pink hair that covers their solid red eyes. They wear a blue pantsuit with black high heel shoes. Their tail is made up of a diamond pattern, which also exists as markings on their neck and feet. In addition, instead of pupils, the diamond pattern also appears on their eyes.

They have an unusual, wild personality and always smile even when they are attempting to be serious. They also have an over-the-top manner of speech, where they draw out their dialogue.

Berg Katse had arrived on Earth to wreak havoc on humanity and eventually destroy the planet.

At the end of the series, it is shown that they are now inside Hajime and they can communicate together, though it appears no one else knows. How or why this happened is never explained in the broadcast version of the episode, as it was left incomplete due to Tatsunoko rushing the last two episodes and being unable to finish them on a deadline. The Blu-Ray release director's cut episode contains the full ending which shows that Hajime founded Katze after she used her invisibility trick and shears Katze's hair and getting their NOTE. By a kiss and pushing Katze's NOTE on herself, she fuses with Katze by a kiss to stop them from making more trouble. They still communicate with everyone when Hajime lets it, but they are revealed to have a very sharp tongue.

Berg Katse has the ability to shapeshift through direct physical contact with a person (usually by kissing) and an extendable prehensile tail that they use as a whip. They can also teleport and manipulate machines remotely. Due to having possession of a NOTE, they can enhance its abilities by activating it. This allows them to extend their tail infinitely to bind, lash or impale their enemies and grants them new powers such as invisibility. Their Gatchaman form was presumably so powerful, Paiman states that it could potentially defeat the G-Crew.

In episode 12, their suit was finally revealed in their fight against OD. They use a guitar-like weapon that somehow manages to pull out his opponent's inner fears as personified images of the opponent. They then stab these images and it somehow causes severe damage to the enemy. They managed to damage OD but were eventually overpowered by him as the fight went on. 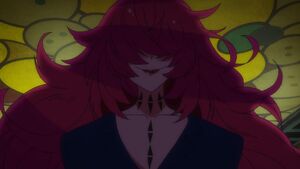 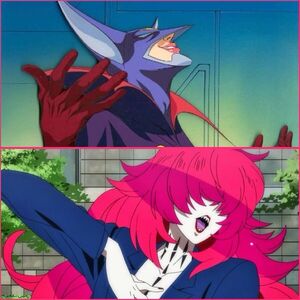 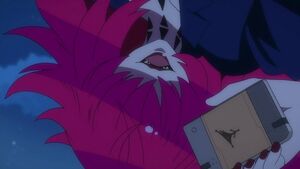 Berg with her NOTE 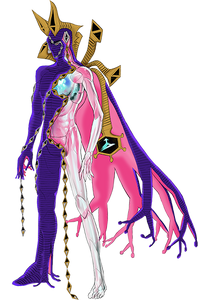 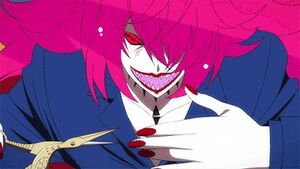 Berg grinning
Add a photo to this gallery

Retrieved from "https://villains.fandom.com/wiki/Berg_Katse_(Crowds)?oldid=3887138"
Community content is available under CC-BY-SA unless otherwise noted.