Conqueror of the Fire Hell

Show the demons' dominance to all of Earth's inhabitants upon successful demonic invasion (failed).

Berial the Conqueror of the Fire Hell is a demon summoned into Fortuna and a boss from Devil May Cry 4.

Nero confronted Berial after he emerged from the Lesser Hell Gate in Ferrum Hills, a deserted mining camp on the outskirts of Fortuna. He stated that he had been to the human world 2000 years before and, upon facing Nero, said that he had never faced a human like Nero, except for "him" (probably Sparda). Berial fled into the Hell Gate into the demon world, but returned to human world later.

After Sanctus unleashed the Savior, the fire demon watched the being's assault from the distance and stated that he found a human pretending to be a god ridiculous. Suddenly he realized Dante was sitting on his tail, who agreed with him. Berial attacked the half-demon, determined to avenge his compatriots, whom Dante had slain earlier. However he was defeated, but refused to retreat again and attempted to finish his opponent off with a final kamikaze assault. But Dante repelled this attack and took the Lucifer Devil Arm, which he used to destroy the Hell Gate.

As would be expected, Berial attacks mainly with fire based attacks and wields a large flaming zweihander sword, which he uses to deliver slow, but powerful strikes. 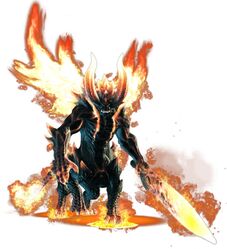 "A human posing as God? How ridiculous!" Retrieved from "https://villains.fandom.com/wiki/Berial?oldid=3203341"
Community content is available under CC-BY-SA unless otherwise noted.