God Told Me To

Leader of the "Apostles" cult

Create a new race by mating with Peter.

Extraterrestrial Cult Leader
Bernard Phillips is the main antagonist of the 1976 science fiction/horror film God Told Me To, which is also known as God Told Me To Kill, and Demon.

He was portrayed by the late Richard Lynch, who also played Franklin Harris in Bad Dreams.

In October 1971, Miss Phillips is impregnated by an orb of light while she was walking alone on the beach one night. Phillips conceives Bernard through a caesarian section on October 15, 1951. Bernard's exact gender was unknown, but she settled on referring to him as a male. While most of his life afterwards is a mystery, Bernard would develop telepathic abilities, which he would use to bend people to his will. Sometime later, Bernard establishes a cult around himself, wherein he brainwashes several average men into becoming his devoted "Apostles". Bernard enacts a genocidal and aggressive campaign, coercing his followers into performing spree killings. With each murder, the Apostles attribute them to his will. Witnesses had also reported that a barefoot young man with indiscernible features would accompany them as they embarked on their crusade, only to vanish.

After a series of murders, NYPD detective Peter Nicholas takes an interest in the religious killings. Sensing that Nicholas was of extraterrestrial origin, he telepathically demands that Peter be indoctrinated into their cult. While they did not understand why Bernard asked this of them, they begrudgingly do as he commands. Nicholas is taken to the Apostles' headquarters and is immediately rebuked by one of the members. When Peter inquires the member about Phillips' origins, the member comes down with a sudden illness and dies. This was presumably done by Phillips as to keep his true nature a secret from the disciples. Logan (who had earlier attempted to warn the NYPD that five people were to be killed during a St. Patrick's Day parade) attempts to redeem himself by pushing Peter in the direction of an incoming train. After this fails, Peter forces him to take him to his master. The two men arrive in the basement of an abandoned building, and Logan kills himself by sticking his head out of the elevator. Bernard initially seems terrified by Peter, but he immediately takes control of the situation when he attempts to fling Peter into a furnace. The furnace explodes, giving Bernard enough time to escape.

Peter does some investigating into his child, and he realizes that he was also the result of artificial insemination. With his newly developed powers, he avenges his coworker Jordan by manipulating his killer into slitting his throat with his own knife. Peter finds Bernard's hiding place, and he confirms his suspicions. He also mocks Peter by telling him that had he not have willed his children to die, they would have inherited his abilities. Revealing himself as a hermaphrodite, he explains to Peter that he was wishing to create a new species to replace mankind. Since Peter's human genes were dominant, he selected him to be his mate. Peter is nearly coerced into becoming his mate, but he resists and slaps Bernard. Realizing that Bernard never felt pain before, the two get into a scuffle which culminates in Bernard using his psychic powers to collapse the building. Bernard is killed by the falling debris whereas Peter escapes. The film ends with Peter being arrested for Phillips' death. When asked why he did so, he simply states that God told him to. 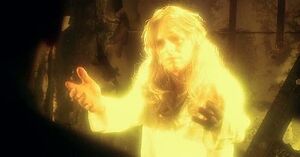 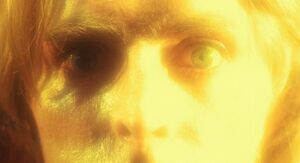 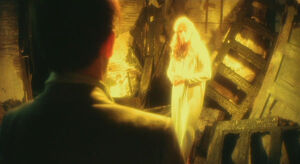 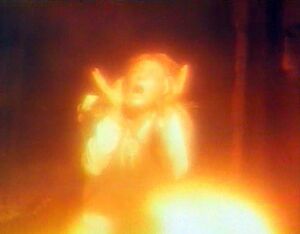 Bernard's death.
Add a photo to this gallery
Retrieved from "https://villains.fandom.com/wiki/Bernard_Phillips?oldid=3873447"
Community content is available under CC-BY-SA unless otherwise noted.