Bernice Florence Hufnagel, also known as Aunt Bernice, is one of the main characters in the TV show Duckman.

She was voiced by Nancy Travis.

Eric Duckman's sister-in-law; the identical sister of Beatrice (Duckman's late wife) and Beverly. She is a fanatic fitness buff and hates Duckman with a passion (The feeling is mutual between the two.).

Though she loathes and reviles their father, Bernice is very loving towards her nephews and is considered to be their primary caretaker. Despite this, Duckman views her as an abrasive, domineering, self-righteous shrew who constantly tries to control his life.

Despite being physically identical to his wife, Duckman is repulsed by her physically, though they once engage in sex while intoxicated. She eventually became a congresswoman. She eventually falls in love with King Chicken, Duckman's arch-enemy. In the final episode, they become engaged and marry. 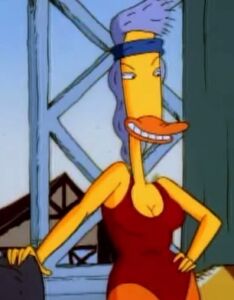 Bernice Florence Hufnagel's evil grin.
Add a photo to this gallery
Retrieved from "https://villains.fandom.com/wiki/Bernice_Florence_Hufnagel?oldid=4340978"
Community content is available under CC-BY-SA unless otherwise noted.