Bernard "Bernie" Bernstein is a minor antagonist in The Powerpuff Girls and the main antagonist of the episode "Film Flam". He is a fraudulent businessman who owns a film company.

He had Professor Utonium sign a contract to put the Powerpuff Girls in his movie. He told the mayor he wants to use the bank's money in the movie for reality's sake.

When he said that he has known the Powerpuff Girls for years, Bubbles corrected him that they only met him yesterday, which angered Bernstein, telling Bubbles to keep her mouth shut.

When the Professor watched this scene on tv at home, he was angry and went to talk to Bernstein for yelling at his daughter. After finding Bernstein's trailer, he found out the movie director was really scheming to steal money from the bank in Townsville during his work on a film about the Powerpuff Girls.

The professor disguised himself and told the girls but he was not believed until it was revealed that Bernstein had no film in his camera or had a script. Bernstein revealed his true colors by holding the mayor captive and driving off.

After chasing Bernstein, who nervously held the mayor at gunpoint, through the streets before he crashed. The girls confronted him but he attempted to flee after the mayor unknowingly distracted them, though Utonium stopped him as he tried to explain himself. Having enough of him, Utonium punched the pleading Bernstein for his actions, knocking him out, as well as breaking his glasses in the process.

Bernstein was presumably arrested and sent to jail afterwards along with his men. 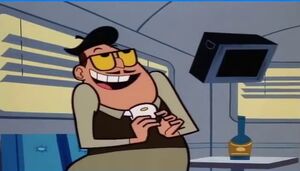 "Gosh. How I'd love to see their faces when they find out that there is no movie, and it was all just a big scam to steal the bank's money. 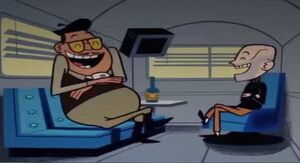 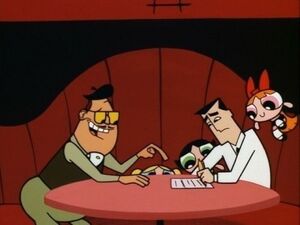 Bernstein having Professor Utonium sign a contract to have the girls in his movie.