The Witch of Miracles

Most Powerful Witch in the Universe

Continue the game to satiate her boredom.

Bernkastel, also known as The Witch of Miracles, is the main antagonist who appears in the Umineko no naku koro ni series. She is an extremely powerful witch that has lived a thousand years. It is said that she lives in a world where concepts like fate and possibility can be visualized. She can give birth to all kinds of miracles with her immense power but, in compensation for that, her heart ends up breaking a bit each time she uses them.

She is voiced by Yukari Tamura, who also voiced Nui Harime in Kill la Kill.

Bernkastel has long steel-blue hair and emotionless purple eyes. It should also be noted that she has medium sized breasts in the visual novel, whereas they appear to be flat in the anime. She wears a black and white Gothic Lolita dress with a blue ribbon. She has black shoes and white socks. She seems to have a cat tail with a blue ribbon tied on it. Her weapon is a long black scythe, which separates miracles from reality. In the original visual novel, she is depicted as an individual around her teens, whereas in the remakes, she is depicted as a child, almost half Ronove's height. In the manga adaptation of Minagoroshi-hen of Higurashi no Naku Koro ni, she takes on the exact same appearance as Rika Furude, the only difference is that she has emotionless eyes.

She also appreciates the aestheticism in the fate of humans, and sometimes, she interferes. In other words, sometimes she's you; and she's also your only friend. The things she like include wine and spicy food. The things she hates are boredom and people who don't learn.

Despite her cute looks and emotionless she seems, she truly has an extremely twisted personality. She is very sadistic and is willing to kill and sacrifice anything or anyone for her own amusement. She is just as, if not even more, playfully cruel than Lambdadelta, who shows a great fondness towards her and outright states that she loves her several times.

She has a tendency to hold grudges and that even a century won't make her forget the humiliation she suffered. As a result of this, she then creates a game where there won't be a happy ending, in the case when she lost a game to Beatrice.

She has also forgotten the concept of pain and fear after centuries of being superior over others.

Bernkastel's true origins are uncertain but it has been suggested that she was once Rika Furude and that after the events of Saikoroshi-hen she separated from her becoming a complete separate being that continues to exist in a higher plane of existence. In Dawn of the Golden Witch, as Lambdadelta talks about the horrors of Logic Errors, she said, as an example, that Bernkastel was a cat used as a piece by an unnamed Game Master. Lambdadelta explains that Bernkastel, just like the "Infinite Monkey Theorem", had to step on a keyboard for centuries until she typed the word "Miracle", thus correcting the error, and earning the title "The Witch of Miracles".

In Twilight of the Golden Witch, during Lambadadelta's inner monologue, Bernkastel was originally a cat of Featherine Augustus Aurora, who was turned into a witch. Legend has it that Bernkastel wandered the sea of Fragments endlessly, searching for any Fragment that can revive her master from the pits of death called boredom, if even for a moment. Eventually, the cat revived her master.

The exact details of Bernkastel's origins are fairly vague and whether it alludes to the events of Higurashi up to the point when Bernkastel separated from Rika in Saikoroshi-hen (as suggested in interviews and in the sound novels of Higurashi Rei and Umineko no Naku Koro ni Chiru respectively) is unknown.

Legend of the Golden Witch

She has a very minor role in this arc. Bernkastel served as Beatrice's guest to view her games to kill her boredom. She only appears in the ??? Scene.

Turn of the Golden Witch

Like in the previous arc, she only had a small role and only appeared in the Tea Party and ??? Scene. In the Tea Party, she was among the goats wearing a goat head mask.

She appeared in the manga and anime adaptations of Umineko no Naku Koro ni. She has also been made into a playable character in Ougon Musou Kyoku CROSS and can be paired with various characters. In the manga adaptation of Minagoroshi-hen of the Higurashi no Naku Koro ni series, she made an appearance in the sea of Kakera where she and Rika Furude discussed the three rules that constantly appear in every story arc of the series. She is also mentioned briefly by Rika at the end of Saikoroshi-hen in Higurashi no Naku Koro ni Rei.

She can use "magic of miracles" to reset a bad situation, as long as the chance of it becoming favourable is not zero. She has experienced having been played with and imprisoned in a cruel fate in the past by Lambdadelta when she was a human being. Hence, it seems she can't ignore the fate of those in same circumstances. In theory, she is the witch with the strongest power, but that is actually not realistic, like folding a piece of paper a hundred times so that it'll reach the moon. And she folded it a hundred times. 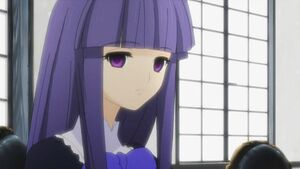 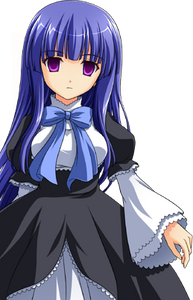 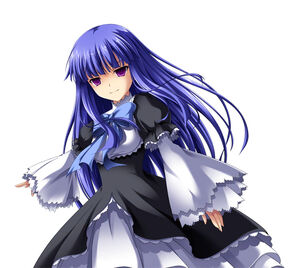 Ougon Musou Kyoku CROSS
Add a photo to this gallery

Retrieved from "https://villains.fandom.com/wiki/Bernkastel?oldid=3458684"
Community content is available under CC-BY-SA unless otherwise noted.