Second-in-command of the Frieza Force

Help Frieza succeed in his plans.

Right-Hand Buisnesswoman
Berryblue is a supporting antagonist in the 2018 anime film Dragon Ball Super: Broly. She is the overall second-in-command of the Frieza Force and is Frieza's right-hand woman, childhood nanny and most loyal attentant.

She is voiced by Kimiko Saitō in Japanese version and Veronica Taylor in English.

Berryblue has blue skin and light purple hair. She wears a variant of the latest model of the Frieza Force Battle Armour. Her uniform is black with green shoulder and stomach plates. Under her armor, she has a white colored robe. She also wears black and green boots.

Berryblue is not afraid to speak her mind to Frieza, no matter what her opinions are. It also appears that Frieza is much more lenient with her behavior than he is with anyone-else, as he did not threaten her when she commented on his short height, implying a form of fondness for his childhood nanny. Since Berryblue has served the Frieza Force since King Cold's reign, along with the fact she was aware of Frieza's height sensitiveness, this implies that she is not only loyal to the tyrants, but also closer to them than most members of the army.

Berryblue joined the Frieza Force during King Cold's reign and over the years, she managed to attain higher rankings. Berryblue also served as Frieza's caretaker during his childhood. Many years later, She is present with Frieza and King Cold when they visit Planet Vegeta to announce Frieza taking is King Cold's place as the leader of his father's empire. Berryblue is among the surviving members of the Frieza Force after Vegeta's rampage across the galaxy searching for Goku and the subsequent crumbling of the Frieza Force without Frieza to lead.

Berryblue is present at Frieza's spaceship when Kikono relays the news that the six Dragon Balls collected by Bulma have been secured by the goons that Frieza sent to steal the balls, along with the Dragon Radar which they are using to find the last ball which pleases Frieza as a result. When Kikono asks Frieza if he is using the balls to wish for immortality Frieza says no due to his experience in Hell making him realize that immortality is not all it is cracked up to be so Kikono suggests invincibility but Frieza thinks it would be boring and tells Kikono to guess but Berryblue knows the answer to this instead and guesses that Frieza is going to use the wish to grow taller which confirms it upon Frieza reacting to her educated guess much to Kikono's disbelief. Berryblue them warns Kikono to be careful around Frieza as she has witnessed Frieza's ruthlessness with people who disparage his stature and Kikono agrees not to tell anyone about what Frieza is using the wish for upon Frieza's desires. Frieza reveals to Berryblue and Kikono that he wishes to be 5 centimeters taller but Kikono then asks why Frieza doesn't just use his taller second form, but Frieza insists that he wants to be taller in his true form. Later when Cheelai and Lemo rescuetwo stranted Saiyans from the inhospitable Vampa, Berryblue brings them to Frieza's spaceship to inform Frieza about their arrival much to Frieza's interest as he can't believe there are still other Saiyans out there. After Broly and Paragus agree to work under Frieza to help Frieza fight the Saiyans on Earth especially Prince Vegeta due to their vengeance against King Vegeta for banishing Broly away from Planet Vegeta, Berryblue is ordered by Frieza to reward Cheelai and Lemo for their efforts of rescuing the two Saiyans so Berryblue presents them with a bounty in the form of intergalactic currency called credits.

3 days after the battle involving Goku and Vegeta against Broly, which Frieza was also involved, Berryblue is present when Kikono informs Frieza that the traitors of his army, Cheelai and Lemo, had sympathized with Broly after having learned Cheelai had used the Dragon Balls that Frieza's hired burglars had stolen from Bulma to wish Broly to be sent back to Planet Vampa though Frieza still thinks that Broly could make a good asset to the Frieza Force if he were to learn how to control his temper so he lets Cheelai and Lemo slide this time to help him learn how to control his temper in hopes Frieza can use Broly's abnormal power to defeat Goku and Vegeta in battle. 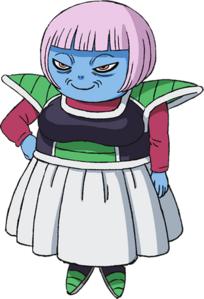 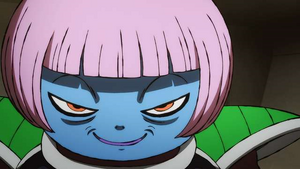 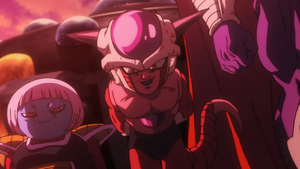 Berryblue with Frieza in a flashback forty-eight years ago. 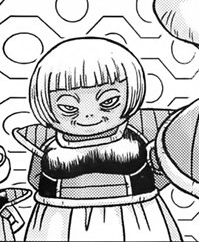 Berryblue in the manga. 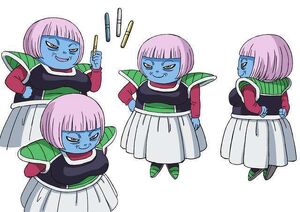