Hunting the most dangerous game (failed).

The Berserker Predator is the main antagonist of the 2010 live action film Predators. He is the leader of Yautja Super Predator trio and the one responsible for abducting humans and other dangerous game for other Super Predators' Hunts.

He was portrayed by Brian Steele, who also played Sammael in Hellboy, Mr. Wink in Hellboy II: The Golden Army, William Corvinus in Underworld: Evolution, and Kothoga in The Relic.

The Berserker Predator and his clan began their new hunt on the Game Preserve Planet. To begin the Predators started toying with their preys to test their sanity and emotion. The first test was to use one of the corpses of a previously hunted human to lure Royce and the others into a trap. The selected human for the test was Cuchillo. While in seemingly horrible pain, Cuchillo kept crying out "Help me." While Isabelle and some of the others wanted to help him, Royce and eventually the others conclusively decided that it was a trap and there was nothing they could do for him without getting killed. Unable to let him suffer, Isabelle shot Cuchillo with her sniper rifle as a coup de grace, but he cried "Help me" once more, much to Isabelle's shock, as she was sure the shot she delivered was an instant-kill. Cuchillo was revealed to have been dead all along and the Berserker Predator's hunting brother, Tracker, was simply playing a recording from his Bio-Mask's vocal mimicry. (In an original unedited script, when Isabelle left the scene unnerved, Berserker and Tracker de-spined Cuchillo).

Later, the group of humans came upon the Predator's hunting camp where they kept their trophies and there they find the Crucified Predator chained to a large totem. Suddenly Mombasa was impaled by spears erupting from the ground and the Berserker with his clan brothers attacked the humans in an deliberate insincere and haphazard fashion. The Berserker fired his Plasmacaster at Royce and the others, destroying Nikolai's M134 Minigun in the process. The humans managed to escape into a river only for the Predator Falcon, belonging to Falconer Predator, to fly overhead and go back to the hunting camp. Falconer, Tracker and Berserker de-cloak. The Berserker was thrilled that the hunt had begun.

After the humans encountered Noland and escaped from his exploding hideout following the death of the Tracker Predator by Nikolai, Stans was suddenly shot from behind by the cloaked Berserker. The Predator de-cloaked in front of the frightened humans and locked his tri-beams on Royce and prepared to fire his Plasmacaster. Stans however, ferociously jumped onto the Berserker's back and stabbed him multiple times, giving the others time to retreat. The Berserker grabbed Stans and threw him over his shoulder with ease. In a final act of defiance Stans taunted the Predator to kill him before the Berserker obliged, tearing Stans' spinal cord along with his skull from his body. Claiming Stans as a trophy the Berserker let out a roar of triumph.

Later, the Berserker caught Isabelle and Edwin in a net and took the two back to the hunting camp. As he threw them into a pit, he noticed that the Crucified Predator had been freed by Royce. The honorable hunter activated his spaceship to get Royce back home. The Berserker roared furiously and as Royce flees, the two Predators charged at each other and clashed. After a relatively short but viciously brutal duel, the Berserker overwhelmed his enemy and grabbed Crucified by the throat. The Berserker took off his Bio-Mask, revealing his face, and roared as he raised his elongated Wristblade. When the battered Crucified Predator refused to show fear, the Beserker Predator swiftly decapitated his enemy; as the lifeless corpse of his foe fell to the ground, the Berserker Predator roared in triumph once more.

The Berserker then recovered his mask and went after Royce; he found the ship taking off. Undeterred, he activated his Remote Detonator by pressing a button on his Wrist Gauntlet and walked away as the ship exploded in the air. Meanwhile in the pit, Edwin paralyzes Isabelle and reveals himself to be a psychotic murderer. Eventually Royce shows up, saves Isabelle, and uses Edwin as a bait for the Predator. The Berserker came back to the camp and found Edwin on the ground, bleeding. The Berserker wily stabbed him with his Wristblade to see if he was alive. Turning Edwin on his back, the Berserker realized too late that Edwin was rigged with grenades by Royce. The grenades ignited and sent the Predator flying back some distance, before he crashed to the ground. However, Berserker was still alive, slowly rose and Royce came out in front of the Predator with an axe-like weapon and battled him.

Royce ignites a circle of gunpowder set up prior, trapping the two in the center and rendering the Berserker's heat vision useless. Angered, the Berserker roars as Royce takes advantage of the surroundings, hiding among the flames. Making repeated hit-and-run guerrilla attacks on the Predator before fleeing back toward the safety of the fire, Royce appears to be wearing the Berserker down. However, the Predator's bio-mask was able to detect Royce's heartbeat through ultra-sound and fires his Plasmacaster at him. Incapacitated by the explosion, Royce is blown back and loses his axe. The Predator begins to violently pummel Royce with his bare hands, grabbing him by the throat preparing to decapitate Royce with his Wristblade. Seeing Royce injured and is about to die, The groggy Isabelle crawls to her sniper rifle and chamber a round. Struggling, she succeeds in shooting the Berserker through the chest and injured it. However, she only manages to enrage the Predator (as Noland said, what kills humans merely hurts the predator). Turning his attention to Isabelle, the Predator launches his Wristblade impaling her in the shoulder. Seeing Isabelle hit by the Wristblade Royce is reinvigorated, regaining some of his strength and unbeknownst to the Berserker, grabbing his axe. Royce strikes at the distracted Predator, destroying its Bio-Mask and exposing its face. Repeatedly striking the Predator in the head with his weapon, Royce severely injures the Berserker, finally severing his left arm. His face finally exposed to Royce, the Berserker roars. With a final heave, the human beheaded the Predator, ending Berserker's hunt.

The Berserker is a cruel, ruthless, traitorous, psychopathic, aggressive, and sadistic monster. He disregards his species' traditional warrior code, seeing it as needless red tape. He also appears to attack always when he has the advantage. This can be seen during the Berserker's final moments, where he does not bother to remove his equipment when engaging both the Crucified Predator and Royce. He is also very arrogant, egotistical, and overconfident, even by Predator standards, allowing Isabelle to shoot and distract him when he could just have killed Royce in a few blows, given his enhanced strength.

His sadism and merciless personality is not only what led to his downfall, but also implied that his kind disgusted with him enough to labeled him as Bad Blood (Yautja whom refuse to receive punishment for brought dishonor to his people).

The Berserker is extremely skilled with weaponry and tracking as much as his brethren, as he easily killed several adversaries in seconds. He also physically strong and durable, as he easily defeated Crucifixed predator and battered Royce whom managed to keep up with him as well as survived grenade explosion without much discomfort.

His weakness however, is his pride and dependent on brute strength than intelligence more than his kind. Whereas other predator uses tactics both in fighting worthy prey and testing their foes' determination against them, Berserker Predator more rely on brute strength that he didn't expect other foes that can outsmart him. 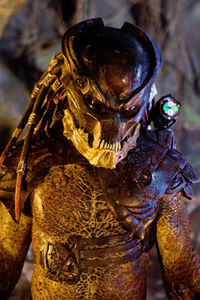 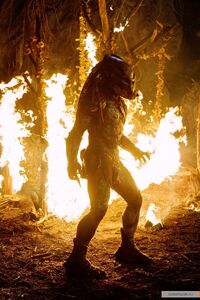 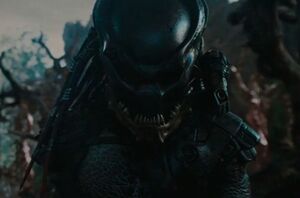 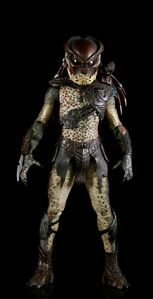 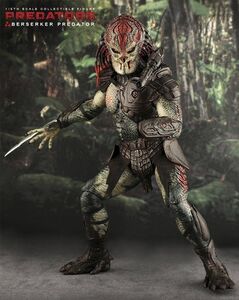 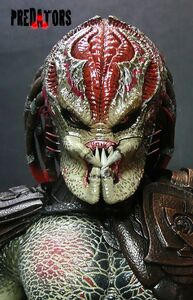 Close-up face of the figure. 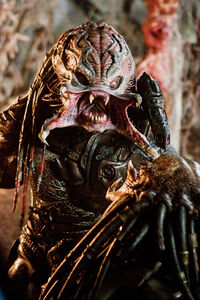