Berthier, also known as Bertie, is a major antagonist in the Sailor Moon series, the second youngest of the Ayakashi Sisters who serve under Rubeus.

Sent to remove all opposition to the Black Moon Clan, Berthier disguised herself to find the Sailor Guardians and targeted Ami Mizuno as a result as she played chess against Ami in a tournament with Chibiusa the prize. Though Berthier lost, she captured Sailor Mercury before being destroyed by Sailor Moon.

Berthier was the first to try and take over a crystal point in Tokyo, and also the first to send one of the Black Moon's Droids. Eventually she played chess against Ami in a tournament and lost, so she did a "freeze play", where the player's body gradually freezes whenever she lost a piece. Tuxedo Mask broke the spell, Berthier is horrified to learn that she is being abandoned to her death by her older sisters. But Koan convinces Berthier that can start anew together as the latter allowed herself to be purified, helping their older sisters make the same choice as the four of them run a cosmetic shop in 20th Tokyo. 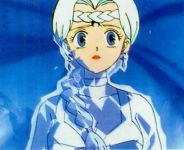