Turn the Koopalings against Bowser Jr.
Overthrow Fawful and claim the Mushroom Kingdom for themselves (failed).

The Best Fitness Friends, later revealed to actually be named the Brute Force Federation, are the main antagonists of the Bowser Jr.'s Journey side mode from the 2019 3DS remake of Mario & Luigi: Bowser's Inside Story. They are a group of humanoid mercenaries who serve Fawful in his attempt to conquer the Mushroom Kingdom. Meeting the Koopa Troop under the guise of fitness gurus offering a cure for the Blorbs, they trick the Koopa Troop into leaving Bowser's Castle unguarded so that Fawful can seize the castle for himself. In actuality, they plan to betray Fawful and claim the Mushroom Kingdom for themselves. During the final battle, the three merge together to create a monstrosity that serves as the mode's final boss.

The Best Fitness Friends were founded sometime before they encountered Fawful. Who actually founded the group is unclear but it is implied that it was Dieter seeing as he is both the de-facto leader and the one who supplies Kaley with the pills that she takes.

Not long before the events of Bowser's Inside Story, either Fawful or Midbus approached them and offered them money in exchange for being his muscle to take over and occupy Bowser's Castle. They agreed but Fawful was unaware that they intended to betray him once it became convenient to them. It is implied that the only reason that they even joined Fawful was just to ensure that they didn't have to fight him in trying to conquer the Mushroom Kingdom until they had a power base.

The Best Fitness Friends are first seen when Fawful summons them after witnessing Bowser leave his Castle for the Blorbs meeting. They were given the mission of invading and conquering Bowser's Castle for Fawful whilst he and Midbus dealt with Bowser, the former reminding them that he was paying them handsomely.

The trio enters Bowser's Castle announcing themselves as the Best Fitness Friends. Although they are almost kicked out by Roy, they fascinate him and the other Koopalings by showing their special cure for the Blorbs called Skeletone Formula:D, which they demonstrate by curing a Goomba of its Blorbs. They tell the Koopalings that they have no more and offer to make more if they gather the ingredients. Bowser Jr. boasts that he can find them and goes off with the Koopalings to find the ingredients.

This turns out to be a ploy for the Koopalings to leave Bowser's Castle unguarded, since only Lemmy was left to guard it with a skeleton crew of Minions, allowing Fawful to easily take over the castle with his Fawfulcopters and Mechawfuls. It is implied by Dieter, when meeting Kaley after she told Bowser of the attack, that the Best Fitness Friends served as his commanders and the leaders of the attack. During Bowser Jr.'s quest, the members of the Best Fitness Friends appear and encourage Bowser Jr. to keep going but they also manipulate the Koopalings into separating from Bowser Jr.'s party, either by making them turn against him or by causing a situation that forces them to split. These include supposedly dispatching Ludwig and ambushing Iggy at Cavi Cape and pushing him off a cliff.

Once Bowser Jr. collects all ingredients for the Skeletone:D and combines them with help from Broque Madame, Kaley steals his Skeletone:D by ramming into him. The BFF reveal their affiliation to Fawful and their true name to be the Brute Force Federation. They combine Jr.'s Skeletone:D with the poisonous breath of a Malodorius Fibbian to create Malatone Formula:X, which they use to brainwash Morton into throwing Bowser Jr. and Kamek into the sea. They also reveal their intentions to use more Malatone:X to brainwash Fawful's army so they can usurp Fawful for control of the Mushroom Kingdom. Sometime after this, they regrouped at Bowser's Castle and Kaley fired off a barrage of Malatone at the minion army, making them feral but obedient thugs that they sent into the kingdom to invade.

Washing on-shore at Plack Beach, Bowser Jr. realizes how selfish he was and recruits the Koopalings. Once Bowser Jr. and troop arrive at Bowser's Castle, Fawful had already left to steal Peach's Castle, leaving the Brute Force Federation to supervise. At first, the BFF manage to overwhelm Bowser Jr. and his forces, but Captain Goomba and the other captains fight off the BFF's minions, allowing Bowser Jr. to rescue Wendy and Roy, as well as feed Morton a Renewaleaf to cure him from the Malatone:X.

As the world darkens from the presence of the Dark Star, Bowser Jr. and his team fight through the BFF's henchmen and engage against them for a final battle. At first, Dieter attempts to allure Bowser Jr. and asks if he fights for good or evil, to which Junior replies that he fights for his own side since good and evil "are outdated, simplistic terms" and "everything is relative." This genuinely surprised Dieter but he didn't care and Jr. engaged him in battle. The BFF sent out their remaining minions before facing the team themselves, boosting their strength with Malatone:X. Following their defeat, the trio fuse together into a giant Malatone-infested monster that creates shadowy copies of the Koopalings. It also swallows more Malatone:X to increase its stats. After a lengthy battle, Bowser Jr. and his troops defeat the monster who explodes in a giant pink=purple energy ball which allows Jr. to reclaim the castle and Skeletone:D, bringing a permanent end to the Best Fitness Friends.

Dieter is the sunglasses-wearing leader of the group. He wears a black and yellow suit and has yellow hair.

Beef is a martial artist and the group's muscle. He has a blobish appearance with red hair, scarlet skin, and black pants with a red karate belt.

Kaley is a small girl with blue hair tied in a ponytail who can flap her wing-like hands in the air like a bird.

Dieter is a fitness-obsessed psychopath who showed some sadistic tendencies over keeping Wendy in a barrel. He is the smartest member of the trio and will do any means to achieve his goals. He is, however, a good leader who is a chauvinist, posing several times and getting into a brief pose-off with Ludwig about it.

Kaley is a conceited individual completely obsessed with being cute. She also happened to be a great manipulator, causing distrust in the Koopalings and indirectly convincing Wendy and Larry to leave Bowser Jr. However, deep down, she is a deeply psychotic and temperamental individual, a single comment being enough to completely enrage her (being called temperamental). She is also addicted to "those pills" which means that she is prone to addiction. She also has a soft spot for Beef, claiming that she feels lost without him. 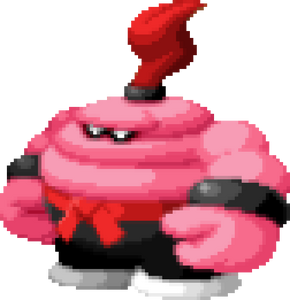 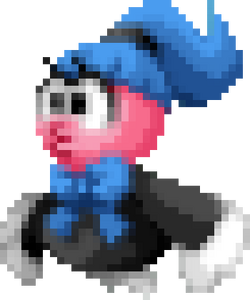 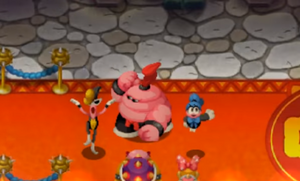 Dieter, Beef, and Kaley introducing themselves to Roy and Wendy. 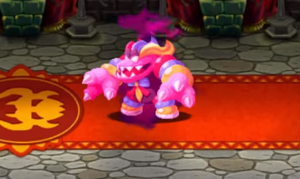 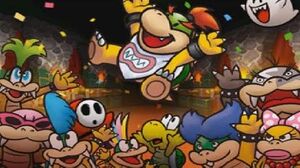