Blending in with Walkers

Serve Alpha in her goals.

Destroy the working communities (both failed).

He is portrayed by Ryan Hurst in the TV Series.

Brutal and unmoving, Beta is aggressive to any and all outsiders. He is obedient to a fault and strictly adheres to the rules set by Alpha, even when she does not follow them. He is extremely protective of Alpha, partially as her bodyguard and second in command and also in part due to his feelings for her. Beta becomes even more dangerous after Alpha's untimely death, leading the largest herd ever seen through Alexandria in an attempt to kill the survivors in revenge.

Beta is an extremely tall and muscular man, standing at roughly seven feet tall. He is so tall his action figure is six inches in height, as opposed to five like the rest. One thing that Beta is fiercely protective over is his face and appearance. He wears his 'skin mask' on his face at all times, even outside of the presence of walkers. If anyone tries to remove it, Beta will kill them without a second thought, even if they are fellow Whisperers. It is eventually revealed, just before his death, that his fierce desire to protect his face was because before the apocalypse, Beta was a very wealthy celebrity. He was a famous basketball player turned actor, starring in movies and car commercials.

Beta confronts Negan, with many other Whisperers, after Negan crosses the border marking the entrance to the Whisperers' territory. After Negan expresses his wish to join the Whisperers, Beta orders the other Whisperers to take Negan to Alpha. Later that day, Beta confronts Michonne and Aaron, in search of Negan under orders by Rick Grimes of the Alexandria Safe-Zone, in the same location. Michonne attempts to explain that she means no harm and is only after a fugitive who crossed the border. Beta ignores this and with his fellow Whisperers attack the pair. Michonne and Aaron try to deflate the situation and refuse to kill any of the Whisperers. Beta takes advantage of this and stabs Aaron in the gut.

Before Beta can deliver a final fatal strike to Aaron, Michonne intercepts his strike and saves Aaron by deflecting his blades. She then slashes Beta across his face with her katana causing him to scream. After Michonne kills another Whisperer, Beta knocks her to the ground remarking that she "will make a lovely mask". Once again, Beta is interrupted before he can kill Aaron or Michonne this time by the Alexandrian militia led by Dwight. The militia kills every member of Beta's Whisperer party with the exception of Beta himself, who escapes. Beta returns to the Whisperer camp where upon seeing Alpha strike Negan he offers to kill him on the spot. She orders him not to do so. He then slams Negan against a tree for lying and claiming that he was unaware of the existence of the Whisperers. After commenting about Beta's impressive height and intimidating appearance, Negan says that despite his lies he has a lot to offer the Whisperers.

As Negan begins to settle into the Whisperer community, Beta starts to question his presence. Alpha asks whether he is challenging her and her commands, but Beta assures her he isn't and Alpha forgives him. Most of the Whisperers appear amazed on how skilled Negan is at killing walkers though Beta does not trust him in the least. During the night, Negan sees a Whisperer woman being raped, but ends it and tries to kill the two men trying to rape her. Beta intervenes, stops him, and informs Negan of the men's right to rape the girl and that he prevented her from being able to prove her strength. Beta informs Alpha that Negan's insult must not go unpunished, and Negan is forced to sleep by himself. After Beta discovers that Negan killed her, Beta says that after Alpha's death, there will never be another alpha (even though he still becomes the de facto leader of the Whisperers). He declares war against Negan and the rest of the joint communities, saying that they will all die.

Panicking after witnessing the immense herd of Whisperers, Gabriel Stokes, of Alexandria, who was keeping watch in a water tower for the advancement of the Whisperers, abandons his position and begins descending the ladder, begging for help. He suddenly falls, only for one of its railings leaving him stuck and in agonizing pain as his leg snaps. Beta and the Whispers continue on their journey as Gabriel is devoured near to the bone by the horde. Disguised in the herd, Beta attempts to attack Dwight, but fails when Negan gains the upper hand, first beating him with his rifle and then with Lucille; he hits Beta in the back so hard that Lucille is destroyed, infuriating Negan. However, the increasingly overwhelming herd prevents Negan from killing him, and two other Whisperers arrive and carry an unconscious Beta to safety.

One of Beta's rescuers remarks that no one has ever seen Beta's face, and goes to remove it; however, the barely conscious Beta fatally stabs him before he can, starting to say that no one may see his face, before passing out again. Once Beta comes to a few hours later, he and the three Whisperers around him vow to continue their plan. Despite being in tremendous pain (even falling over a few times), Beta and his small group successfully direct their massive herd towards Alexandria, with Beta remarking that the dead will finish what they started. Weeks after Beta's final attempt to destroy Alexandria and the surrounding communities fails after the group successfully directs most of the horde into the ocean and finishes off the rest of the herd, Beta separates himself into the surrounding wilderness, his attempt to avenge Alpha and the other whisperers a failure. One night he finds Paul Monroe and Aaron sleeping in the forest en route to the Hilltop.

Sneaking up on Paul while Aaron is sleeping, Beta prepares to strike but Paul quickly spots him. The two brawl while Aaron rises and has to fight walkers surrounding them. Beta is almost about to plunge his blades into Paul until Aaron shoots Beta through the chest. After finishing off the remaining walkers, Paul and Aaron remove Beta's mask and are stunned to recognize him as a famous and wealthy basketball player and actor. Beta suddenly rises and cries that he has no name and is no one before succumbing to his wound with a thud to the ground. 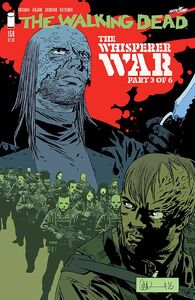 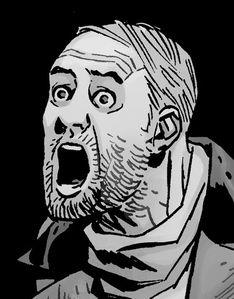 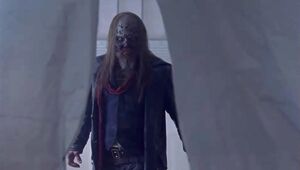 Beta in the TV Series.
Add a photo to this gallery

Retrieved from "https://villains.fandom.com/wiki/Beta_(The_Walking_Dead)?oldid=4210373"
Community content is available under CC-BY-SA unless otherwise noted.