Beth
The Goth
Morticia Adams (by Kym)
The Killer

Terrorize and kill “Deion Elliot” and his friends for being "Hypocrites".

Murder "Hypocrites" and show them what they really are on the “inside” before killing them (both failed).
Kill Shane as revenge for him being a “coward” and for almost killing her.
Kill Amir for being a "snitch" (both succeeded).
Kill Liv for being the "Final Girl" and be the sole survivor (failed).

Beth, also known as Ghostface, is the final antagonist of the Scream TV series, serving as the main antagonist of the third and final season. Beth is a serial killer who kills people she views as hypocrites and is also Jamal Elliot's former partner.

She is portrayed by Giorgia Whigham. While in disguise, she is voiced by Roger L. Jackson. In-costume stunts were portrayed by William Scharpf.

Beth was a born sociopath with an obsession for horror movies. She watched every film she could get her hands on, but it still wasn’t enough to satiate her thirst for violence, and eventually she came to believe that she could be a better killer then any Slashers she’d seen on film. She wanted an origin story that would make her justice and found her accomplice in the shape of Jamal Elliot, who came into the tattoo parlor where she worked. Their common inner darkness led to an instant connection between them.

Jay would eventually reveal to Beth his tragic past, including the secret that his half-brother Marcus had stolen the identity of their deceased brother Deion. Seizing the opportunity, she seduced and manipulated Jay into kick-starting a killing spree with her. Using the costume Deion was wearing the night he died, they targeted those they saw as “hypocrites” (including Marcus), acting one way on the ”outside” but actually being someone completely different “inside”. Beth integrated herself into their intended victims' cycle, pretending to also be a target of the Killer and joining the group who she herself christened The Deadfast Club.

While being in detention, Beth left Jamal to commit his own vision while hiding in plain sight. She used her knowledge about horror movies to pretend she's guiding her fellow survivors. The first phase of her plan was flirting with Amir, who initially refused her advances, in order to gain the first person who completely believes her lies.

Later that night, Beth tracked Shane down and called him out for being a drug dealer, moments before trapping him under a ladder and injecting him an overdose through his eye.

At the night came after, she went with Kym and Manny to the countryside, and secretly cut Kym's tires. Kym was convinced that the culprits were a group of rednecks and confronted them. This drove her and Manny into a heated argument, causing them to split. The rednecks chased Kym, and Beth and Manny went to investigate the killer's involvement. Beth lost one of her shoes during the investigation and used it to ditch Manny. She dressed like Ghostface, threw Manny inside a car and burned the cornfield sorrounding them, and as a result, Manny was burned alive inside the car.

The next night was used to commit the second phase of her plan, which involved Amir coming to her house and using him for her own enjoyment before sending Jamal to attack him. Amir escaped from Jamal but got caught by Beth, who personally cut him vertically with a bone saw using the elevator.

The third phase of her plan was committed during a party when she pretended to join Kym in her struggle to find the killer in time. Her original idea for this phase was to track down Liv and frame her as the final part of her plan but was forced to kill Jamal after the latter attempted to tell the police about her.

The fourth and final phase of her plan involved framing Liv and being closed with her at the same room long enough to shoot her when she was off-guard. Unfortunately for her, Liv was on to her during a conversation about Amir's death and promptly knocked her out with a broken flag pole. Marcus rushed Liv's aid, knowing she isn't the killer. He was initially worried to see her covered with blood until Beth came up and revealed it's her blood. She drew a gun, shot Marcus and left him behind in the favor of chasing Liv. After a long chase to the roof, Beth started to close on Liv and talked about her wish to prove she's the best killer, aside with taking pride at her sociopathic nature and dislike toward hypocrites. Before she could resume the assault, Marcus surprised her from behind and knocked her out with his football helmet, causing her to fall down through the glass.

At her final moments, she saw Marcus and Liv regaining their breath, only to be confronted by Kym, holding them at a gunpoint. Beth attempted to use the distraction for one final attempt to chop Marcus and Liv with her hatchet, but Kym quickly shot her to death.

Unlike most of the other killers in the franchise, Beth was very outspoken about her anti-social nature. As a self-proclaimed goth girl and horror fan, Beth was very sarcastic, vain and constantly took pleasure of mocking society. Her long past as a juvenile delinquent reflects by her intensive engagement in risk behaviors (such as smoking), and overall recklessness. 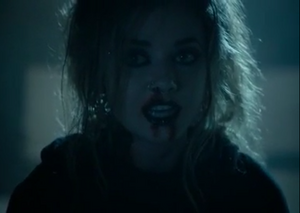 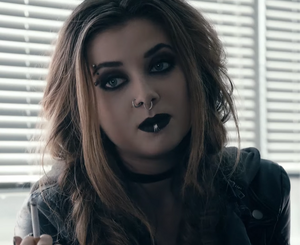 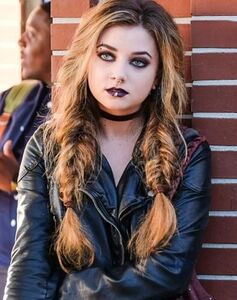 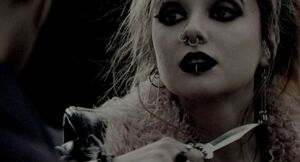 "One of us is gonna die"