Drive Jerse to kill others and ruin his self-worth (failed).

Abusive Dissociative
Betty is one of the central antagonists of the X-Files episode, "Never Again". One of the show's many "Monsters of The Week" she was not so much a physical being as a split-personality of sorts to another character, though due to the paranormal nature of the show much of Betty's nature was left to the viewer's imagination.

From a scientific view Betty can be explained as a hallucination caused by red dye toxin used in the creation of the tattoo but for more outlandish minds and theories she can be seen as the infamous "Hyde" if Jerse's "Jekyll", his dark and self-loathing persona who was awoken by the hallucinogenics and took control : whatever Betty's true origins she was extremely abusive, cruel and chaotic with a desire to ruin Jerse's life and kill as many people as possible along the way.

Betty was the name of a tattoo received by Ed Jerse. She appeared as a vaguely sinister winking woman with the words "Never Again" written below.

Agent Scully learned that the brilliant red dye on Betty's lips contained a hallucinogenic compound that made Jerse believe he could hear Betty "speaking" to him. Betty constantly attacked his self-esteem and prompted him to explode at his coworkers and murder one of his apartment building neighbors.

Upon meeting Scully, Betty became very jealous and nearly succeeded in convincing Jerse to kill her as well. However, Jerse was able to overcome Betty's influence and thrust his arm into the building's furnace, burning off the tattoo. 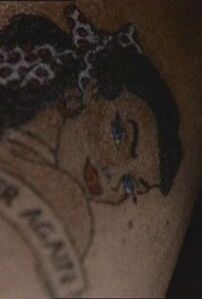