Killing anyone whom he thinks works for the Chosen One

Kill the Chosen One

Master Pain, better known as Betty, was the main antagonist of Kung Pow! Enter the Fist. He was the Chosen One's arch-nemesis and the former leader and boss of his henchmen. He worshipped the Evil Council.

Master Pain was a Kung Fu master who dedicated himself to the Evil Council. One night, he and two of his minions came to a house whose family was part of a rival order. They slaughtered the whole family, and found that their baby was the Chosen One. In an attempt to kill it, the baby blocked Master Pain's hand. It attacked the assassins which it's unnatural gifted powers of Kung Fu. The minions attempt to flee, but Master Pain killed them both for their cowardness. Seeing that the baby was too much for him, he decided to seal it inside the house and set it on fire. Master Pain walks away from the burning house, not knowing the baby got itself out.

In Kung Pow! Enter the Fist

Betty was very comical while at the same time ruthless. He didn't care whom he had to kill, as long as it meant coming a step closer to defeating the Chosen One, even killing his own henchmen at the beginning of the film. He would kill children as well, shown when he killed the Chosen One's siblings during his search for him and tries to kill the Chosen One as a baby. However, Betty also possessed a sensitive side and an unusual sense of humor, claiming that while people say that he does things that are not "correct-to-do," he views himself as a nice man with "happy feelings" and sharing a joke, and has been shown to be somewhat courteous to his enemies, offering Master Tang a glass of water after noting that Master Tang appeared to be coughing heavily.

Overall, Betty is hinted to be slightly insane, as he changes his name from "Master Pain" to "Betty" (and becomes enraged once the Chosen One points out that "Betty" is a woman's name) almost completely at random, randomly changes the mayor's clothes from black to red and back again, and makes random grunting moments and pauses in his speech.

It's vaguely implied that Betty may be a closet homosexual, given his choice of name as "Betty", unusually high-pitched voice, promising to "shake [Master Tang's] bouncy booty", and insistence that he does indeed like women. However, he also half-threateningly flirts with Ling and the aforementioned promise to shake Master Tang's booty was an affirmative answer to Master Tang's challenge to fight, so his sexual preferences are ultimately a mystery.

He loved to play songs when fighting enemies, such as "Baby Got Back (I Like Big Butts)" by Sir Mix-A-Lot or "Can't Touch This" by M.C. Hammer.

Betty is a muscular man wearing a sleeveless black shirt that bears the symbol of the Evil Council (a metal triangle) and black arm braces. He has a moustache and a receding hairline. Betty often carries his weapon of choice, a pair of iron claws tied together by rope, on his person, though he's also known to have an assistant carry them for him.

Betty is an accomplished martial artist, having the skill to defeat and kill Master Tang in battle. He is shown to be very skilled in the use of his signature pair of claws tied together by a rope. Betty has two signature skills: First, he is extremely resistant to pain, being able to withstand multiple hits by a wooden staff, even to the crotch, and second, he can use a pressure-point strike technique that he calls the "Paralyzer."

Betty is also a "great magician," having the ability to change the Mayor's clothes from black to red. 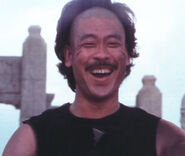 Betty laughing evilly
Add a photo to this gallery

Retrieved from "https://villains.fandom.com/wiki/Betty_(Kung_Pow!_Enter_the_Fist)?oldid=3769506"
Community content is available under CC-BY-SA unless otherwise noted.