Bevelle (ベベル, Beberu) is a flying city in Final Fantasy X and Final Fantasy X-2. The capital of Spira's dogmatic society, it is initially the home of the Yevon religion as well as their own "holy city" and, later, home of the New Yevon party. Being Yuna's place of birth, it remained her home until the day her father, High Summoner Braska, defeated Sin.

In the English localization, Bevelle is pronounced [bəˈvɛɫ].

One thousand years ago, Bevelle was a technological wonder surpassing even the glories of the city-state of Zanarkand. The escalating hostilities between the city-states culminated in a war and Bevelle held the advantage with its machina weapons. Though it developed the mobile weapon Vegnagun, they could not use it as Vegnagun was unable to tell friend from foe. Zanarkand's leader, Yu Yevon, gathered the Zanarkand survivors and turned them into fayth, using them to conjure a dream world parallel of Zanarkand at the height of its glory.

To shield himself and his creation, Yu Yevon clad himself in armor formed from pyreflies, becoming the creature known as Sin. Sin turned on Zanarkand, decimating it, and though Bevelle had thus won the war, Sin remained in Spira, attacking machina cities. Having made a pact with Yu Yevon's daughter, summoner Yunalesca, to safeguard itself, Bevelle established the Order of Yevon to preach Yu Yevon's teachings while secretly continuing to use machina.

10 years ago when his Al Bhed wife was killed by Sin, Braska resolved to become a summoner. Joined by Auron and Jecht as his guardians, Braska embarked on his pilgrimage to Zanarkand, leaving behind a 7-year-old Yuna in Bevelle. Yuna learned of her father's success and that it had claimed his life. She was found by Kimahri Ronso, who had come to take her to Besaid Island to grow up peacefully as a request from a dying Auron of what the girl's father wanted of her.

A decade later, having become a summoner to begin her own pilgrimage, Yuna is abducted from the Al Bhed Home by the Guado and taken to Bevelle to be married to the unsent Seymour Guado. Though Yuna plotted to use the wedding for a chance to send Seymour to the Farplane, her guardians being held at gunpoint force her to comply. When Seymour orders her guardians executed, Yuna threatens to commit suicide. Yuna falls off the palace top while summoning Valefor to break her fall and take her to Bevelle Temple to gain Bahamut. Once her guardians arrive they are arrested.

Yuna is put on trial for killing Seymour in the Macalania Temple. During the mock trial, Yo Mika reveals he is an unsent like Seymour, and that unchanging continuity and rule by the dead in the spiral of death is what Yevon is about. Yuna and her guardians are imprisoned in the Via Purifico. Finding Lulu, Kimahri, and Auron, Yuna duels against Isaaru in a contest of aeons at the dungeon's exit before they meet up with the rest of her guardians and on the Highbridge. Confronted by Seymour who has killed Wen Kinoc and absorbs his pyreflies to become a fiend, they defeat him and escape into the Macalania Woods.

The party visits Zanarkand Ruins and fell the unsent Yunalesca who had remained in the Zanarkand Dome to grant summoners the Final Aeon at the end of their pilgrimage only for Sin to be reborn. The party returns to Bevelle where Yuna reveals she ended the Final Summoning and, seeing no hope for Spira, Mika departs to the Via Infinito rather than see Sin destroy the world. The party asks Shelinda to spread the word of singing the "Hymn of the Fayth" to pacify Sin, and sets out to fight the beast on their airship, the Fahrenheit. During the assault the weakened Sin falls from the sky and crashes on a part of Bevelle.

After Sin had been vanquished for good, Bevelle fell into chaos. The Yevonite priesthood fell in the wake of the revelations of its origins, hypocrisy and lies, and disbanded in the face of the theocratic society's breakdown. During this cultural upheaval a former Yevonite named Trema rejuvenated interest in Spira's history in the form of ancient spheres, and many sphere hunting groups sprung up ready to take on the task. New Yevon party was founded but Trema suddenly disappeared with the discovered spheres with their contents never made public, and the leadership fell to a chairman who attempted to get Yuna marry his son to garner public support. The chairman was forced to relinquish leadership to Baralai as he sought to continue Trema's philosophy of gradual adjustment to the new order of the world.

2 years after the start of the Eternal Calm, Yuna returns to Bevelle with Rikku and Paine. While waiting for an audience with the New Yevon praetor, Yuna proposes they leave, and tells the others about how she turned down an arrangement with the chairman's son. Baralai appears and reveals the chairman and his son were kicked out of the New Yevon party. Depending on whether or not the "awesome sphere" from Kilika is given to New Yevon, the Gullwings will either be accepted by the party or declared enemies.

Later, the Gullwings learn from the Leblanc Syndicate of Vegnagun being hidden beneath Bevelle. The two groups jump into the hole in the Chamber of the Fayth, and discover the Bevelle Underground, a complex filled with machina remaining from the Machina War. They find Vegnagun gone, the machina having responded to Nooj's attempt to destroy it by burrowing into the Farplane.

After Baralai disappears, having ended up being possessed by Shuyin while in a private discussion with Nooj and Gippal in the Bevelle Underground, Bevelle falls into turmoil. Isaaru might leave Zanarkand and try to help the New Yevon party get back on its feet and the Gullwings and Kinderguardians can discover a hidden maze-like dungeon called the Via Infinito.

Bevelle is still the capital of Spira and the home of a new governing body known as the Spiran Council. Baralai, now leader of the council, sends Chuami and Kurgum to Besaid to meet with Yuna. The two meet Tidus at the Bevelle Stadium that is under construction, but Chuami notices he's injured and trying to hide it. Later, Chuami and Kurgum return to Bevelle with Yuna and it is discovered Sin has been revived, possibly beckoned to Spira from the Farplane by someone's wish. Yuna delivers a speech to a crowd in a stadium, possibly the one in Bevelle, proclaiming she will defeat Sin once more.

In Final Fantasy X, "The Wedding" plays during Yuna and Seymour's wedding scene. "Assault" (襲撃, Shūgeki) plays when Yuna's guardians attempt to save her from marrying Seymour. "Believe" (私は飛べる, Watashi wa Toberu?) plays when Yuna jumps off the ledge and summons Valefor. "Hymn of the Fayth - Bahamut" (祈りの歌~バハムート, Inori no Uta ~ Bahamūto) plays in Bevelle Temple's Chamber of the Fayth. "Moment of Truth" (審判の時, Shinpan no Toki) plays when Yuna stands before the court of Maesters in Bevelle.

In Final Fantasy X-2, the theme that plays in Bevelle is "New Yevon". "Bevelle's Secret" (ベベルの秘密, Beberu no Himitsu) and "Under Bevelle" (アンダーベベル, Andā Beberu) play when the Gullwings are uncovering the secrets of the temple's underground complex. "The Temples" plays in the New Yevon Headquarters and the Cloister of Trials. 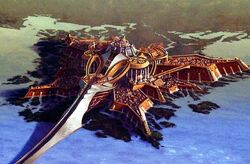 Retrieved from "https://villains.fandom.com/wiki/Bevelle?oldid=1749265"
Community content is available under CC-BY-SA unless otherwise noted.