Loving birds as well as whistling to them.
Loving and caring for her family.
Recycling.
Making prank phone calls to Mrs. Dottie Hinkle.

Kill all of her family's enemies, to be charged not guilty of the crimes she committed.

Beverly Sutphin is a serial killer and the protagonist villain of the classic 1994 dark comedy film Serial Mom. She is the wife of a dentist Dr. Eugene Sutphin and has two teenage children Misty and Chip. She stays at home as a housewife while her husband works. Beverly kills people who she thinks that did her and her family wrong.

She was portrayed by Kathleen Turner, who also played Dr. Elena Kinder in Baby Geniuses, Matty Walker in Body Heat, Claudia in A Simple Wish, and Constance Nebbercracker in Monster House.

Beverly Sutphin is a not-so-ordinary housewife who lives in Baltimore, Maryland with her two children and her husband. From her appearance, she looks to be a nice, friendly, and wholesome woman. However, beneath her sweet personality, she has an extremely bad temper. Anyone who she feels does her or her family wrong, she becomes obsessed with trying to exact revenge. Beverly has an unusual obsession with serial killers. She reads a lot of true crime novels, as well as having personal contact with a handful of killers, including Ted Bundy.

Her abnormal behavior is first seen when her neighbor, Dottie Hinkle, takes Beverly's parking space at the store. Beverly becomes enraged, and starts harassing her and makes obscene phone calls to Dottie.

Beverly begins her killing spree when her son's math teacher, Mr. Stubbins, tells her that her son needs therapy. Beverly loses her temper and runs him over with her car.

Beverly continues her murder spree, when she kills her daughter's ex-boyfriend (who cheated on her) with a fireplace poker.

She continues her murder spree, killing anyone who she feels is an enemy of her family. She is finally caught and put on trial. However, she manipulates the witnesses of the prosecution in several different ways, and ends up being cleared of all charges. In the last scene, she brutally attacks and killed one of the jurors who found her innocent because she is wearing white shoes after Labor Day. 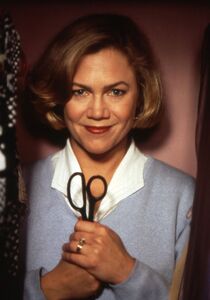 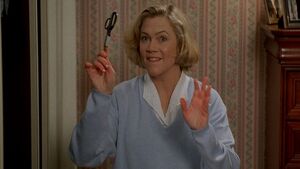 Beverly Sutphin on a bloody rampage.
Add a photo to this gallery
Retrieved from "https://villains.fandom.com/wiki/Beverly_Sutphin?oldid=4281829"
Community content is available under CC-BY-SA unless otherwise noted.