Bishop of the Roman Orthodox Church

Various crucifix attacks
Authority over 1000 soldiers
Leadership within the church

Destroy the city of Venice for its ties to Academy City and the Science Side.

Eliminate the enemies of the Church and all that is declared unholy.

Biagio Busoni  (ビアージオ＝ブゾーニ Biājio Buzōni) is a character introduced from Volume 11 of the A Certain Magical Index series. He's the main antagonist of the La Regina del Mare Adriatico Arc of the series. He's a bishop of the Roman Orthodox Church and has the authority to command over 1000 soldiers for his project.

Biagio is a tall man covered in decorative clothing. He wears primarily white robes with many gold features and jewelry over his body. He is covered in golden jewelry. He also has many small crosses across his chest and wears a small red cap.

Busoni is a ruthless man who sees nothing but pure glory in the Roman Orthodox Church. He views the church as superior and is willing to sacrifice people's lives in an effort to save the Guaridan Amada and its name. Like virtually all antagonist magicians in the series, he's a fanatic who is devout to the cause of supremacy of the Roman Church.

In the aftermath of the events of September 20 with the capture of both Lidvia Lorenzetti and Oriana Thomson by the English Puritan Church, the Roman Orthodox Church is put into a state of emergency and thus, Pope Matthai Reese orders the mobilization of the Queen of the Adriatic Sea fleet and Bishop Biagio Busoni is placed as the fleet's head commander. Following Busoni becoming the fleet commander, he has the Agnese Forces placed under his command as punishment for their failure to capture Orsola Aquinas and they are forced to work as slaves for the ship with Agnese Sanctis making sure they don't revolt. One night on a trip to Vienice, Northern Italy, Touma Kaimjou and Orsola accidently find themselves on the ship and they reunite with Agnese and help her get Lucia and Angelene out of the ship when they find themselves surrounded and tossed off the ship to which all four of them are rescued by the Amakusa Church nearby. The Amakusa launch an attack against the fleet and Touma soonf faces off against Bishop Busoni and he beats him during their second fight. He's later on captured by the Anglican Church at sent to the Tower of London as a prisoner along with Lidiva.

In October, Busoni remains imprisoned in the Tower of London by the Anglican Church and both he and Lidiva are soon visited by Siyl Magnus and Agnese for interrogation. Here, he's been sleep deprived and both his skin and hair look cracked and dry but he still maintains his arrogance and has shown on display often glaring at Siyl wanting him to reveal the famous torture tools that the English Puritan Church has to he could show him what "true pity" looks like. Stiyl then counters Busoni's arrogance by telling him that he shouldn't underestimate Necessarius and that they have other ways of getting information without keeping them alive so he should cooperate. Busoni then remains silent as Lidvia tells information about Vento of the Front of God's Right Seat in exhange for Oriana's freedom which she gets.

Busoni is a magician and has the ability to summon various cross-related attacks against his enemies. His cross attacks are both Christian and Pagan related. 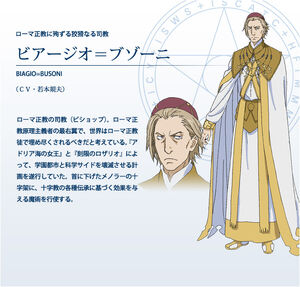 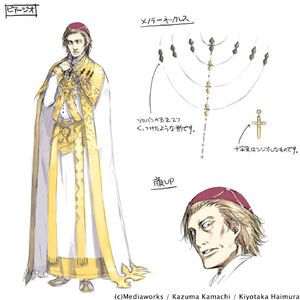 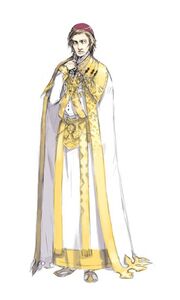