Communication between each other

The Bidybabs are supporting antagonists in the 2016 horror video game Five Nights at Freddy's Sister Location. They are baby animatronics and Circus Baby's minions in the game.

The Bidybabs are small, baby-like animatronics with a pale tan colored exterior. Each of the two have different colored eyes - one has light-purple eyes, and the other has blue-green eyes, but these eyes change to bright yellow in the Sister Location's Custom Night. They feature a triangular-shaped orange nose, squarish teeth in a similar style of a classic nutcracker, they have orange-colored lower lips and eyelids, five-fingered hands, smaller ears, and a single metallic button in the middle of their chest. They seem to wear light-brown, vest-like shirts and shorts. They are also barefoot with four toes.

The Bidybabs become active on Night 2 when the player hides underneath the desk in the Circus Gallery. They will attempt to open the desk door twice and peer through the holes in it. If the player keeps the door closed, they will whisper to each other and leave. One of them also appears in the Elevator and inside Michael's house as an easter egg.

The Bidybabs make their second appearance in the Custom Night. They can be found in the vents. 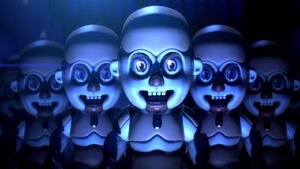 The Bidybabs in the "Sister Location" Trailer.

Ditto but when the player is shining their flashlight on her.

A Bidybab crawling through a vent.