Hold total control over the town of Hill Valley.

BiffCo Enterprises, also known simply as BiffCo, is a toxic waste company founded by Biff Tannen after making millions betting on horse races with help of the Grays Sports Almanac in the "Biffhorrific" timeline (specifically alternate 1985), and an antagonist faction in Back to the Future Part II.

Back in 1955 when he was a teenage high school student, Biff received the Gray's Sports Almanac from his older self from the year 2015 under the presumption that they are both distant "relatives". He told him that the book tells every sporting event until the end of the 20th century. Old Biff told him that all he had to do is bet on the winners and he would never lose, and so young Biff took his word and bet on winning race horses and became a millionaire overnight on his 21st birthday 3 years later and was ironically named as "The Luckiest Man on Earth" by the local Hill Valley Telegraph newspaper. But before young Biff proceeds with this "gift" the elderly Biff has given him, he warned his teenage self to keep it hidden and away from anyone (in this case, Marty McFly and Doc Brown) who would threaten to expose the Almanac even by asking questions about it, and if that ever happens, he must dispose of them (even if it means murdering them).

In 1958, he soon used his money and started his namesake nuclear power plant BiffCo, which eventually grew into a massive industrial empire, and became one of the most richest and powerful men in America, while he enjoys his newfound fortune in everything including chasing the world's beautiful women, owning a yacht he named "Monkey Business", and owning his own namesake mansion "Tannen Manor" somewhere in California, possibly near his home of Hill Valley. BiffCo invested in toxic waste reclamation and in other heavy polluting industries. Biff's position in the company gave him great influence over political leaders and law enforcement, in which Biffco obtained ownership (either by force or acquisition) of the Hill Valley Police Departmernt in 1968. He also helped Richard Nixon remain President of the United States until at least 1983 (while seeking a 5th consecutive term). Biff's effects on history affected the whole world – in this version of history, the Vietnam War was also still ongoing by May of 1983.

Biff legalized gambling in 1979 which later lead to build his own "luxurious" casino hotel which was built at the site of the old Hill Valley Courthouse. Though he was recognized as one of America's folk heroes, his enormous casino hotel, complete authority over the local law enforcement, and money-driven power, turned Hill Valley into a dystopian breeding ground for crime, corruption, and gang warfare by October, 1985.

BiffCo Realty, real estate company that is a part of BiffCo Enterprises, owned Lyon Estates ( a line under the statues of lions said that Lyon Estates was "a proud member of the BiffCo family").

Lorraine is unaware Biff killed George back in 1973 before and after he married her not long afterwards, possibly with the offer of giving financial support to the young widow and her three children, but the money and power had gone to his head and he treated her horribly, and among other things, forced her to get breast implants. This went on until 1996 when Lorraine finally shot Biff which ultimately lead to the sudden and permanent downfall of BiffCo.

The existence of BiffCo Enterprises along with the horrible version of 1985 was erased after Marty and Doc Brown undo the changes made by the old Biff and restore their original reality by destroying the Gray's Sports Almanac (ironically with a match advertising the BiffCo empire). 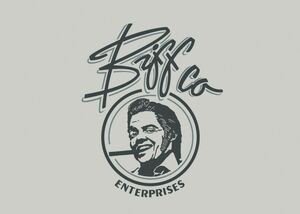 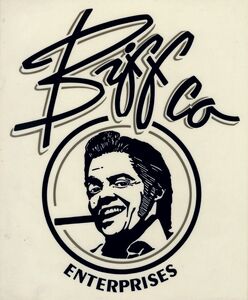 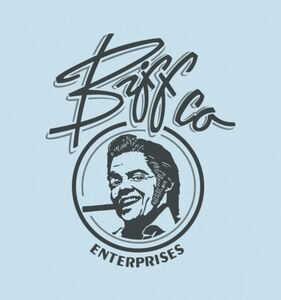 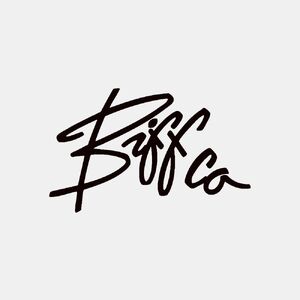 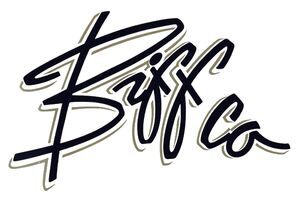 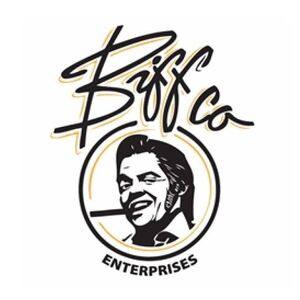 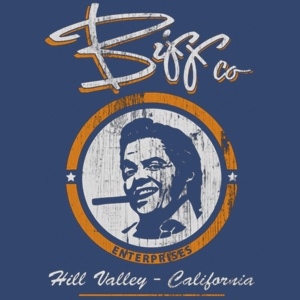