Envious Archrival
Biff Wilcox is the main antagonist of S.E. Hinton's 1975 novel Rumble Fish, and its 1983 film adaptation. He is the leader of the Devilhawks and Rusty-James' archrival.

He was portrayed by Glenn Withrow, who also played Tim Shepard in The Outsiders.

He was a former ally of Rusty-James' group and the leader of a gang called the Devilhawks.

When Rusty-James is playing pool at Benny's, he is warned by Midget that Biff is looking to kill him and they decide to meet at an abandoned garage lot for the rumble at eight.

Later that night, Rusty is preoccupied with Patty, his catholic school girlfriend, and arrives late to the contest, but he takes over the rumble to battle Biff single-handedly. The two battle, with the fight ending when Rusty disarms Biff and beats him almost unconscious. However, Rusty gets distracted when the Motorcycle Boy arrives and Biff slashes Rusty on his side. As he tries to escape while gloating at Rusty, the Motorcycle Boy uses his motorcycle to run it into Biff and send him flying into the air. While Biff stumbles away in defeat, Officer Patterson arrives at the scene and is vexed by the return of the Motorcycle Boy, whom he reviles as a menace.

The resulting fight later causes Rusty to get expelled from his school and be put in Biff's school. 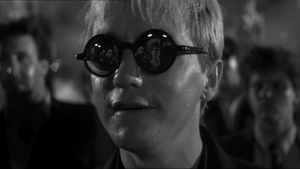 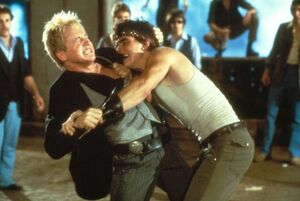 Biff Wilcox fighting Rusty-James.
Add a photo to this gallery 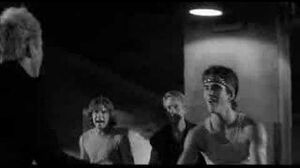 Retrieved from "https://villains.fandom.com/wiki/Biff_Wilcox?oldid=3700671"
Community content is available under CC-BY-SA unless otherwise noted.