The Big Bad Wolf is a legendary villain from children's fairytales, appearing as the main antagonist of The Three Little Pigs, Little Red Riding Hood, The Wolf and the Seven Little Kids, and The Boy Who Cried Wolf.

He is depicted as a cunning, predatory, and manipulative wolf who wishes to devour the three pigs - managing to blow down the house made of straw and the house made of sticks, forcing the two hapless to run away to their brother's home: he was smart enough to have built his home of bricks. Not one to give up the Big Bad Wolf went after them and threatened to blow the house down as he had done with the others, but he was unable to do so due to the strong bricks, he still refused to give up and tried to climb down the chimney but the three pigs were prepared and set a fire on, depending on the version the wolf is either boiled alive in a pot (a more gruesome ending from traditional fairytales) or he simply gets his tail burnt and flies back up the chimney and runs away never to be seen again.

However, in some other versions, there is no huntsman and the story ends with the Wolf eating and killing Red and her Grandma. Another version has the Wolf trick Red into eating her Grandma's remains (by calling them 'meatloaf'), turning Red unwittingly into a cannibal. He then tells her to strip and throw her clothes into the fire and tells her to lay in bed with him (meaning he has other things in mind than just eating her). The story still ends with Red getting eaten.

The Boy Who Cried Wolf

Although not specifically named in this story, the Big Bad Wolf does appear near the end as a villain of sorts, this tale is one of the rare moments he actually succeeds in devouring someone and it is often used as a symbolic tale on how lying is a dangerous pass-time.

According to the tale there was once a boy who always lied and the villagers grew angry with him and eventually opted to ignore him, this proved to be his undoing as he was attacked by the Big Bad Wolf and cried out for help: of course none of the villagers would listen as his many previous lies had made them distrustful of him and thus the wolf devoured him.

The Wolf and the Seven Little Kids

In the story of The Wolf and the Seven Little Kids, the Big Bad Wolf is first mentioned by the old mother goat when she told her kids to not open the door to him while she is away, and that he might disguise himself, but that he would be recognized by his rough voice and black feet.

The Big Bad Wolf chases the kids, who try to hide from him, and devours all of them, except for the youngest kid, the one who is in the clock case. The Big Bad Wolf then goes to a meadow and sleeps there. The old mother goat then returns from the woods and is devastated to see that her house is destroyed and that almost all of her kids are gone, with the exception of the youngest kid, who tells her the horrible incident of the Big Bad Wolf.

Then, the Big Bad Wolf wakes up and feels the stones in his belly, who makes him very thirsty. He goes to a well and tries to drink, but his heavy belly pulls him down and he drowns and dies. The old mother goat and her seven little kids then dance happily around the well now that the wolf is gone forever.

Big Bad Wolf, is appear of the Cameo with episode: In Like Blunt. Check kindnap a S.H.U.S.H. Agent List for once.

In the ABC fantasy drama, the Big Bad Wolf is actually a werewolf whose human form is none other than Red Riding Hood. Her grandmother purchased a red hood from a wizard to stop her transforming when there was a full moon.

The Land of Stories

The Big Bad Wolf is a posthumous antagonist in The Land of Stories, who was killed by the hunter after the wolf almost ate Red Riding Hood. When he was killed, his children formed themselves to become "The Big Bad Wolf Pack". They are led by Malumclaw and together they attack any unsuspecting victims. 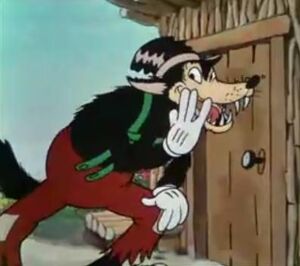 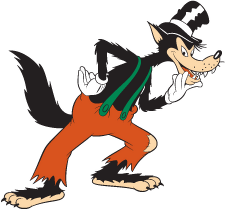 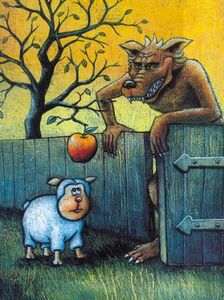 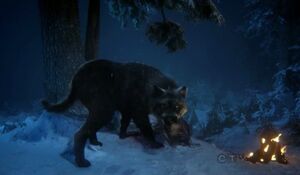