Kidnap Cry Baby and force her to stay with him. (failed)

He is a humanoid wolf who works as an ice cream man and stalks, grooms and eventually holds Cry Baby captive after discovering her in a vulnerable and lonely state.

He was portrayed by Brian Zuniga.

The Wolf first appears while stalking Cry Baby during her trip to the local corner store in his ice cream van, smiling and waving at patrons in the process. Cry Baby remains oblivious to this however the cashier seemingly knowing what's going on hands her a vial of blue liquid much to her confusion. When she exits she notices the Wolf sitting in his van waiting for customers and decides to buy some ice cream, he complies and serves her the cone for free, while she remained oblivious to the fact that he drugged the cone the wolf watched on in anticipation as she ate it. Cry Baby then collapses, and the Wolf takes her unconscious body into her van.

He brings her to his home and locks her away in a toy chest, after escaping she makes her way around a pink room with furry wallpaper and several pictures of infant girls on the walls. She finds a note from her captor on the fridge, telling her to leave cookies on the table for 3pm sharp. Upset Cry Baby makes him his food, all the while the Wolf sits and watches her on his TV excitedly. Cry Baby then notices the vial the cashier gave her and realised it was poison. While the Wolf was distracted on the telephone via prank call she decided to mix the poison into the cookie mix, although irritated by the call the Wolf remained oblivious to his prisoner's true intentions.

Sure enough by 3 Melanie served the wolf his food and he entered the kitchen enthusiastically, stroking Cry Baby's hair in the process. He began feeling the effects of the poison immediately and fell to the floor choking all the while Cry Baby manically danced around him and poured milk all over his head before escaping, leaving him to die.

The Wolf was a very cunning and intelligent being, and fairly sinister, something he hid well behind a jovial and kindly persona. He was also fairly lazy and greedy however which would eventually become his downfall.

He took a perverse liking to Cry Baby upon first seeing her, and decided to make her his personal slave, thankfully however she managed to stop his reign of terror before he could do a significant amount of permanent harm to her.

The Wolf was a large humanoid figure with a slight gut who for the most part had the body of an ordinary human man aside from his head which was that of a wolf's with dark grey fur with a white centre and black patches surrounding it. He also had yellow eyes.

In his first appearance he wore his traditional ice cream man attire, that of a white boiler suit above a casual suit with white gloves and a matching hat. His second outfit was that of a plain white shirt with a sky blue interior and cuffs, as well as burgundy polka dot cravat and blue trousers. 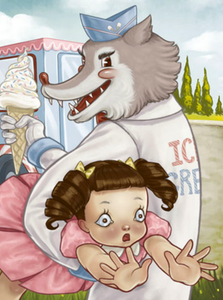 The Wolf as depicted in the books 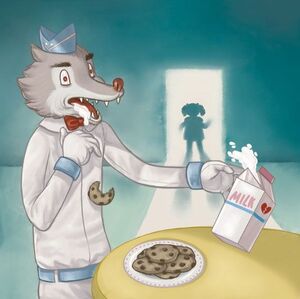 The Wolf's death in the books 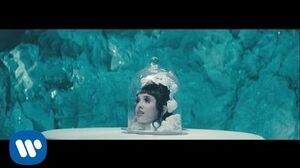