To keep his slaves (failed).

Big Bayou is the main antagonist of the Courage the Cowardly Dog episode "The Uncommon Cold".

He was voiced by Tim Curry.

Big Bayou is very vain and loves look at himself and his skin statues. So egotistical he can't attack others that look like him.

Not is much is known, but some time ago he imprisoned the slugs with his bayou magic and forced his slaves to make "statues" of him from the skins he sheds. The slugs managed to steal a piece of magic from him and send a message in form of a cold which got to Muriel.

When Courage and Muriel came to free the slugs, he caught with his magic book and chased him into the swamp. Courage tricked him into using his venom on his "statues" to bring them to life and then Courage ordered them to attack Big Bayou. This scared Big Bayou out of his wits as he was too self absorbed to attack images of himself. He begged for mercy, but the statues surrounded and took him away. He is later seen suffering and getting tortured and locked with chains around him. 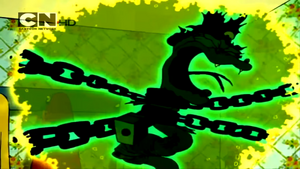 Retrieved from "https://villains.fandom.com/wiki/Big_Bayou?oldid=4331971"
Community content is available under CC-BY-SA unless otherwise noted.