Tormenting Roger and his loved ones.

Drive Roger mad and kill him.

Big Ben is the main antagonist of the 1986 American horror-comedy film House (not to be confused with the 1977 Japanese film or 2000s film which both share the same name).

He was portrayed by Richard Moll, who also played Hugh Kane in Scary Movie 2.

Big Ben was introduced as a soldier in Roger Cobb's troop during the Vietnam War, ill-disciplined and mean-spirited he was far from a malevolent man until the point he was wounded and begged Roger to mercy kill him, unable to do so Roger fled and Big Ben was captured by enemy troops and tortured for weeks before his death.

This would lead to Big Ben's vengeful spirit masterminding a series of horrific events to lure the man he blamed for his suffering to him - using Roger's aunt's House to do so, the building being an evil network of portals to varied hell-dimensions and thus allowing Big Ben to easily gather forces and manipulate events to his whim.

Big Ben begin by kidnapping Roger's son using a portal in the House's swimming pool, leading to Roger's divorce and obvious distress - at some point after these events Big Ben once again struck with the aid of the House's evil inhabitants, driving Roger's aunt to suicide.

This would lead to Roger taking ownership of the House for a short while, little time was wasted as Big Ben haunted Roger with graphic nightmares of his Vietnam experiences while varied Demons struck at Roger and anyone that came near him or the House.

Ultimately Roger would learn about the House's true nature and managed to locate his son, freeing him from the hell-dimension Big Ben had trapped him in, yet in the process Big Ben manifested in the House proper and engaged in a brutal chase with Roger that ended in Roger apparently tossing Big Ben off a cliff.

Yet Big Ben returned moments later, threatening to slit Roger's son's throat but Roger realized Big Ben could not harm him or his son anymore as he no longer feared him - thus Roger finally defeated Big Ben once and for all by using a grenade on Big Ben's belt to obliterate the monster and a good portion of the House.

The film ends with Roger and his son leaving the burning House, with Roger's former wife arriving and the family seemingly reunited - free from Big Ben and the House's other demons.

empowered by the energies of the House, Big Ben was immensely powerful and masterminded plans involving inter-dimensional kidnap, assaults via demons and minor reality-warping: however, he usually fought with brute force, his machine-gun and other military weaponry, even without this arsenal he was effectively invincible until Roger no longer feared him, after which Big Ben became extremely vulnerable, to the point he was completely obliterated by a single grenade.

In life, Big Ben was a violent, aggressive and uncivilized soldier who hated taking orders and enjoyed mean-spirited pranks, but he became much more malevolent in his afterlife - due to his treatment by enemy forces and his hatred for Roger, to the point he was willing to kill a child simply to keep Roger terrified: in part it is revealed that he required this fearsome persona because without fear he could not harm any living creature. 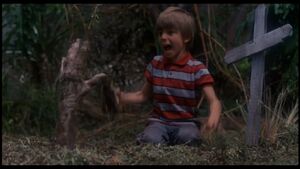 Big Ben's brief appearance in one of Roger's nightmares 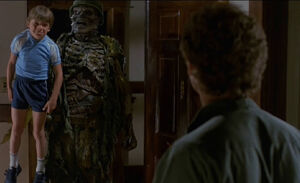 Retrieved from "https://villains.fandom.com/wiki/Big_Ben?oldid=3288183"
Community content is available under CC-BY-SA unless otherwise noted.