Rule over Empire City with an iron fist (failed).

Brandon "The Big Boss" Babel is the main antagonist of the 1980s animated series COPS. He is a notorious crime lord who plans to rule Empire City with a literal and figurative iron fist.

He was voiced by the late Len Carlson.

He is Empire City's worst nightmare and most wanted criminal. He runs a crime syndicate called C.R.O.O.K.S made up of dangerous burglars, muggers, thieves and kidnappers who rules the criminal underworld with literally an iron fist after an accident caused him to lose his left hand. It was replaced with a cybernetic hand which he uses to smash things when enraged. He with an Edward G. Robinson-style voice, nearly always uttering a soft spoken 'mahh' as he speaks to himself, his thugs, enemies, or anyone else. Surprisingly fast and agile despite being a morbidly obese 350 pound man, Big Boss makes sure that no criminal caper goes on without him knowing about it and giving his approval.

Big Boss is never without his pet weasel, Scratch who keeps Big Boss company everywhere he goes. Just like Big Boss, the accident caused him to be severely injured, leading him to have a cybernetic body and metal paws to help protect his life.

Although despite the fact that he's a ruthless crime lord, Big Boss is morally opposed to drugs. After Buttons McBoomBoom brings Addictem to Big Boss' headquarters, Big Boss promptly turns down any business relationship with him, with the reasoning that "Drugs kill.". 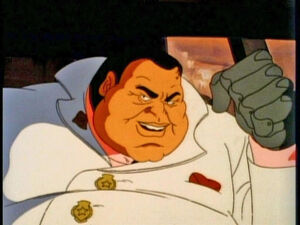 Big Boss with his iron fist. 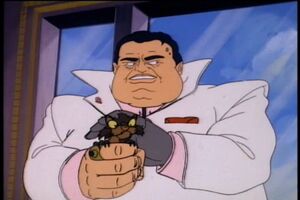 Big Boss and his weasel, Scratch. 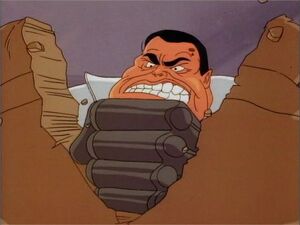 Big Boss smashing a statue.
Add a photo to this gallery
Retrieved from "https://villains.fandom.com/wiki/Big_Boss_(COPS)?oldid=3486405"
Community content is available under CC-BY-SA unless otherwise noted.