Kill any who gets on his way.

Gabe "Big Boy" Famoni is the leader of a large underworld organization and the main antagonist in the Dick Tracy comic strip series. In his prime, Big Boy was a large imposing figure, slightly heavyset, with dark eyebrows and several gold teeth. In the 1990 film, the character's name is Alphonse "Big Boy" Caprice. He is Detective Dick Tracy's arch nemesis.

He is portrayed by Al Pacino, who also portrayed Michael Corleone in The Godfather trilogy, Tony Montana in Scarface, Richard III in Looking for Richard, Walter Burke in The Recruit, John Milton in The Devil's Advocate, Shylock in Merchant of Venice, Willy Bank in Ocean's Thirteen, Lefty in Donnie Brasco, David Fisk in Righteous Kill, Roy Cohn in Angels in America, Wilhelm Zuchs in Hunters, and Jimmy Hoffa in The Irishman.

Big Boy ran his criminal enterprise from the city in which Dick Tracy lived. One night, Big Boy sent two of his men to rob the home of Emil Trueheart, a delicatessen owner and father of Tracy’s girlfriend Tess. The robbers took Emil’s savings, shot him, and kidnapped Tess. Emil died from the injury and Tracy, who was present, swore revenge.

Tess was brought to Big Boy’s hideout where he was impressed by her good looks while she was repulsed by him. Big Boy decided to enlist Tess in his next crime, the robbery of a payroll, believing that no one would suspect that an innocent-looking young blonde woman was driving the getaway car.

Tracy, appointed to the Detective Bureau of the City Police by Chief Brandon, had gone undercover to find Tess and was able to extricate her from Big Boy’s scheme. After that, Big Boy continued to operate behind the scenes, often using lieutenants like Ribs Mocco and his sometimes-girlfriend Texie Garcia. As Tracy began to more and more effectively combat his criminal endeavors, Big Boy became increasingly desperate.

The Waldorf Kidnapping and Capture

Big Boy’s next big plot was the kidnapping of Buddy Waldorf, the son of wealthy financier John H. Waldorf. Big Boy and a female accomplice abducted the child and planned to take him away on a cruise ship, the Alonia. Tracy discovered this plan and managed to board the Alonia just before is left port. Big Boy learned that Tracy had tracked him down, and he was eventually able to ambush Tracy and throw him overboard. Tracy survived and was able to get back on board the Alonia. With the help of the crew, Tracy rescued Buddy Waldorf and administered a serious beating to Big Boy (May 19, 1932).

Big Boy went to jail, but he was not completely absent from Tracy’s life. After a failed escape attempt, Big Boy continued to direct certain underworld activities from prison through his agent, “Boss” Jim Herrod. When Herrod was discovered, Big Boy refused to help him. Herrod was eventually killed and Big Boy escaped prison soon after that, resuming control of his organization with the help of his lawyer Spaldoni.

When the author Jean Penfield prepared the manuscript of a book that detailed his criminal activities, Big Boy tried to arrange for her to be killed. The potential hitman, Jimmy White, failed and Big Boy was implicated in the attempted murder. He was apprehended and sent back to jail.

After serving 18 years in jail, Big Boy was eventually released. His local Outfit was now revealed to be part of The Apparatus, and it was further revealed that he was not merely a member of the nationwide organization's governing Council, but was, by far, the most powerful and influential member of that Council. Though control of the Apparatus was lost to him when Tracy successfully sent him to prison, Big Boy was still respected and influential. Big Boy learned that he was dying and wanted revenge on Dick Tracy before he died. He issued a one million dollar Open Contract on Tracy, meaning that anyone who successfully killed Tracy could collect the money. Several attempts were made on Tracy’s life, one of which claimed the life of Moon Maid, Tracy’s daughter-in-law. The other leaders of the Apparatus believed that the contract would attract too much attention to their activities, and counter-acted it by issuing a one million dollar bounty on anyone who made any further attempt on Tracy’s life.

Big Boy, angry and desperate, contacted Johnny Snow, aka The Iceman, a killer for hire. Big Boy believed that Snow would not fear the Apparatus’ bounty and would kill Tracy just for the challenge and the chance at glory. Snow took the contract but failed to kill Tracy. Snow himself was shot and died in the attempt. Before he expired, he revealed who had hired him.

Tracy and Sam Catchem arrived at Big Boy’s home with a warrant for his arrest mere moments before Big Boy himself died of a heart attack. Sam observed the irony that the man who had fostered so much violence during his life finally died at home in bed.

Many years later, Dick Tracy encountered a young criminal who went by the name Little Boy and claimed to be Big Boy's grandson. It was eventually revealed that this claim was untrue and that no familial connection actually existed between the pair.

Big Boy was a character in the "Dick Tracy" segments of the 1971 animated television series "Archie's TV Funnies", produced by Filmation Associates. Big Boy's appearance somewhat resembled his depiction in the comic strip. He was portrayed as part of a large, international criminal organization, and had arranged several daring jailbreaks.

Alphonse “Big Boy” Caprice was the main antagonist in the 1990 “Dick Tracy” film.

In the film, Big Boy was an ambitious former enforcer for Lips Manlis, a crime boss in charge of a gambling ring at Club Ritz. Big Boy has Lips' men killed and eventually captures his former mentor. At gunpoint, Big Boy coerces Lips to sign over the deed to all his territory including the Club Ritz, also taking Lips moll, singer Breathless Mahoney as his own. Despite Lips giving Big Boy everything he owned, Big Boy has him killed anyway with the bath; an execution method consisting of putting the victim in a crate, burying the victim up to the neck in concrete, closing the crate, and then dropping it into the sea leading to a slow death by drowning.

Because of his keen intellect and connections, Big Boy was able to avoid prosecution for his crimes. The only witness to Lips murder, Breathless, was too scared to testify against Big Boy. However, Big Boy attracted the attention of Dick Tracy, who became determined to put an end to Big Boy’s operation. Big Boy united the various gang lords under his leadership, when one refused, Big Boy has him and his gang killed by a car bomb.

He then attempted to bribe Tracy, but Tracy refused and escaped the death-trap in which Big Boy and his lieutenants (Flattop and Itchy) had left him in, rescuing fellow cop, Bug, from being another victim of the bath. Big Boy’s conference room was later bugged by Tracy, who then managed to counter all of Big Boy’s activities.

Desperate, Big Boy agreed to pay the mysterious figure called “The Blank” to remove Tracy as an opponent. Once Tracy was framed for murder, Big Boy enjoyed unprecedented success.

On New Year’s Eve, The Blank kidnapped Tess Trueheart and planted her in the Club Ritz, intending to frame Big Boy for the crime. Big Boy learned of this and, fearing reprisal from Tracy, tricked his men into serving as a distraction by ordering them to engage the police in a shoot out at Club Ritz, whilst he secretly escaped and took Tess through a series of secret escape passages, tying Tess to the gears so that her head will be crushed "like a walnut!."

Tracy, who had been released from jail, tracked Big Boy to the control room of a lift bridge after a violent shootout with his henchmen, where the two men and the Blank had a final confrontation. Big Boy shot and mortally wounded the Blank, who was revealed to be Breathless Mahoney. Tracy and Big Boy battled and struggled, leading to Big Boy falling to his death into the gears of the lift bridge. 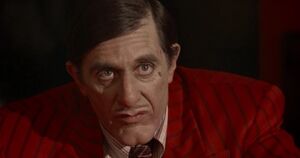 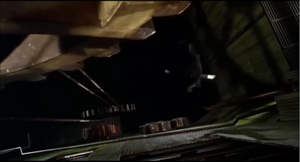