Apologize for his actions (succeeded).

The Brother is a major antagonist in the Five Nights at Freddy's franchise.

He is the Crying Child's emotionally abusive older brother and the one who caused The Bite of '83. He is also heavily implied to be a younger Michael Afton.

The Brother is likely to have made a quick cameo in the secret ending of the Midnight Motorist minigame. When the Orange Man returns to his house, a person watching a TV show in a tells him to leave "him" alone, as he had a rough day. The man tries to enter "his" room anyways and gets increasingly aggressive, eventually trying to enter through the window, only to learn that the person has run off to "that place again".

Although not confirmed, it is likely that the Orange Man is William Afton and "he" is the younger brother from Five Nights at Freddy's 4.

The Brother is only seen in the minigames, particularly on the second, third, fourth and fifth nights. It is revealed on Night 5 that he plays the role of the child's older brother.

He hates his little brother for unknown reasons, and has apparently abused the child for a long time, so long to the point that it's one of the main reasons for his emotional breakdowns, besides an unknown event related to springlock suits. Five days before his younger brother's birthday party, he locks him in his room, laughing sadistically from the outside. The Fredbear plushie seems unfazed by what the older brother is doing, only asking what he has done "this time". Fredbear constantly tries to help the child avoid his brother, guiding him with his words.

On the day of the party, the child's birthday, the Brother and his bully friends, wearing the masks of Freddy, Bonnie, and Chica, surround the child and torment him, the one in the Chica mask commenting that the child is pathetic. The Brother suddenly gets the idea to force the child to be right next to the Fredbear animatronic, the child screaming and shouting as he is dragged over to him. The Brother decides to force his younger brother's head into the animatronic, saying that it's a "big kiss" to Fredbear. He underestimates the strength of the mechanical jaw, only excessively laughing with his bullies as his brother's head is stuck. The child's head gets stuck between the second row of teeth, and the machine overpowers his skull, crushing the entire head, causing the Brother and the bullies to stop laughing and look in horror.

After the bite, the child begins to die. The Brother comes to his little brother's bedside, and apologizes in a brief statement. He had felt remorse for what he caused, and presumably put himself on the path to redemption. The Brother is most likely the one that experiences the nightmares, as many things prove this.

The Brother is shown to be a sadistic and manipulative trickster, who never ceases to abuse emotionally and psychologically his brother. He seems to have no care about his brother's depression, as he torments him even in his own room. However, he is extremely remorseful for his actions, as he came to his little brother's bedside, apologizing for his callous behavior. His background is mostly told via silent actions within retro-graphics, or by reading between the lines throughout the games.

Big Brother behind the TV after scaring his brother. 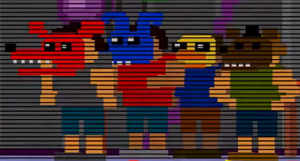 Big Brother looking down at his younger brother.