Ordering people what to do and dictating their daily lives.

Big Brother is a dictatorial 25th century comedian and the main antagonist of the Season 2 episode "Brave New Johnny" of Johnny Bravo. He is the main host of his own television show that all of Earth's citizen under his oppressive reign must watch every day known as "Big Brother Comedy Hour". He commands armies of people that he uses to send anyone who shows signs of not following him to reeducation camps. He also outlawed some things on Earth such as kissing which made both men and women to make out via devices called "Hyper-Lib Metabulators". He never gets tired of policing the world and the minds of it's citizens and he despised critics.

He was voiced by Tim Curry, who also played Pennywise in IT, Ben Ravencroft in Scooby-Doo and the Witch's Ghost, Maestro Forte in Beauty and the Beast: The Enchanted Christmas, Billy Flynn in Criminal Minds, Lord of Darkness in Legend, Kilokahn in Super Human Samurai Syber-Squad, Drake in The Pebble and the Penguin, King Chicken in Duckman, Long John Silver in Muppet Treasure Island, Belial in The Legend of Atlantis, Hexxus in FernGully: The Last Rainforest, Farley Claymore in The Shadow, Thaddeus E. Klang in TaleSpin, General Von Talon in Valiant, Dr. Frank-N-Furter in The Rocky orror Picture Show, Professor Calamitous in The Adventures of Jimmy Neutron: Boy Genius, Taurus Bulba in Darkwing Duck, Mouse King in Barbie in the Nutcracker, Wadsworth in Clue, Darth Sidious in Star Wars: The Clone Wars, and El Malefico in Mucha Lucha!: The Return of El Malefico.

Since Johnny Bravo was encased in Mr. Kevin's triple strength hair gel and revived 500 years later by Carl #97324 (direct descendant of Johnny's annoyingly nerdy neighbor Carl Chryniszzswics who also known as Carl Chryniszzswics I), he gives him the tour around the world of the year 2499 A.D., now seen as a dystopian hi-tech society that survived 6 World Wars and 2 global epidemics and the planet is filled with talking humanoid cockroaches and fossil-fueled power-ground vehicles. He also takes the disgusted Johnny to Aaron City's still-preserved local diner Pop's Moon Palace via the planet's tube transport system. Upon their arrival at the diner, Johnny sees the well-preserved talking head of Pops in a head jar who explained that he froze his head in the year 2007 after a tussle with a meat slicer and also described that not everyone is willing to preserve their own heads and live forever for it is indeed a "sad, freakish existence". While Carl 97324 is eating unflavored soy mulch, Johnny spotted a beautiful lady who brought her Hyper-Lib Metabulator and kissed him 4 times before she ran as the mass sound of sirens alerting the scheduling time of Big Brother Comedy Hour. Carl takes him to a TV studio and they both watched among the studio audience as the show began. Not satisfied with his jokes, Johnny shouted to Big Brother, "You stink! Who got the remote?!". Angered by Johnny Bravo's blatant disregard, Big Brother ordered his guards to arrest him but he and Carl #97324 escaped.

Johnny jumps through a time machine in an abandoned facility (not wanting to live in the future or with Carl #97324 who is a bit as annoying as his great-great-great grandfather) and returned to the Mr. Kevin's hair gel factory but fell into a vat of Mr. Kevin' hair gel again. At the end of the episode, Big Brother appears on the TV screen and shouted "SEIZE THEM!!!". 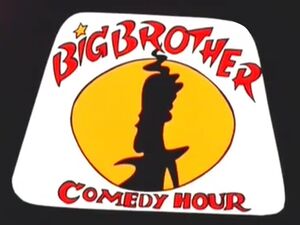 Big Brother Comedy House
Add a photo to this gallery

Retrieved from "https://villains.fandom.com/wiki/Big_Brother_(Johnny_Bravo)?oldid=3653218"
Community content is available under CC-BY-SA unless otherwise noted.