Big Brother is the overarching antagonist of the late George Orwell's 1949 masterpiece Nineteen Eighty-Four (also known as "1984"). He is an all-powerful authoritarian dictator of Oceania, a fictional totalitarian state taken to the extremes of its logical conclusion: where the ruling class are in complete and utter control of the hapless masses and wield absolute power.

In the society of Big Brother, the entire population is under constant surveillance via telescreens and has no privacy or freedom outwith what Big Brother decides to afford them - Big Brother is forever reminding his people of his presence via simple but effective propaganda.

Since the creation of Big Brother by George Orwell, the name has become a symbol for oppression, especially the type in which personal freedom is removed via surveillance and whenever a government is seen as abusing its power, it's also often labeled a "Big Brother" state.

The ruling government of Big Brother's dystopian world is known as INGSOC (English Socialism) and this party runs on an extreme form of totalitarianism that has seen them totally rewrite the laws of society to the point they have even replaced the English language with "Newspeak" - a type of language designed to mask the true meaning of words and phrases, Ingsoc also continually "rewrites" history so as to hide things from the population, making finding facts about their origins very difficult (if not impossible).

Through what can be found we learn that Ingsoc was formed sometime after the socialist revolution and that Oceania was formed via the unification of the America and the British Empire - Big Brother and Emmanuel Goldstein led the party until Goldstein ultimately went against Big Brother and became an enemy of the state.

Big Brother himself is a mysterious individual and although constantly displayed as an all-powerful, all-knowing figurehead there are serious questions as to whether he or Goldstein ever existed as actual people or if they are both tools used by The Party to inspire love and hate respectively within the minds of their citizenship.

Big Brother is often displayed to the public on telescreens and posters with a daily series of events known as the "Two Minute Hate" and the "Love Of Big Brother" being performed by citizens throughout Oceania.

During the "Two Minute Hate" images of enemies of Big Brother are shown to the public and they are expected to express their hatred of Goldstein and the democracy he embodies, with this being a form of brainwashing designed to embitter the citizenship against the ideas of freedom and strength, reinforcing the idea that Big Brother is the only true path.

Following the "Two Minute Hate" the citizens of Oceania are subjected to the "Love Of Big Brother" in which they are expected to perform a ritual of devotion to Big Brother which consists of murmuring "B.B." continually with long pauses between the two B's, with this disturbing ritual being able to last as long as thirty seconds and was designed as yet another tool of mind-control.

It is often speculated that Big Brother was actually a non-existent person, made up by the Ingsoc propaganda like Comrade Ogilvy, thus making him only a symbolical ruler of Oceania.

Big Brother or similar concepts have appeared in countless other media, including books, films, cartoons, radio, plays and almost anything else one can imagine: Big Brother is one of the most widely known and used antagonists in popular culture.

1984 was made into a live-action film in (fittingly enough) 1984, with this film being largely loyal to the original novel though it did have several differences, as is usual for film adaptations of novels.

Parodies And Other Uses

By his very nature, Big Brother is an important symbol and tool, as such the concept is often open to parody as well as other uses outside the traditional role of oppressor.

Perhaps one of the most (in)famous examples of Big Brother being parodied (or at least used in a fanciful way) was the now-famous Apple commercial in which a group of people is sitting next to a telescreen with the image of what is presumably Big Brother, only for a woman (symbolizing Apple) to run into the room and throw a sledgehammer at the telescreen. The advert itself has been parodied several times and entered popular culture, though Apple did find itself in trouble over this advert, as some felt it was a deliberate copyright-infringement.

The Big Brother government appears in Alan Moore and Kevin O'Neil's The League of Extraordinary Gentlemen series as having taken over England for a period of time before eventually falling. Such scenes include the time-traveling Andrew Norton witnessing a riot being quelled by Thought Police and a parody "Tijuana Bible" in Newspeak from the time.

Big Brother As A Symbol

Big Brother is widely regarded as a symbol of abuse of power, communism (especially the kind used during the era of Stalin) and fascism. Many of the tactics used by the oppressive government of 1984 paralleled those used by such real-life dictatorships as Nazi Germany, Soviet Russia and even, to a lesser extent, the British Empire.

The idea of a government amassing total and utter control over its citizenship has captured the imagination of many from all walks of life and Orwell's works often seemed to be his way of warning people about the very real dangers of such governments, much as Animal Farm, symbolized the inevitable outcome of communist rule (at least in Orwell's view) so too, it could be argued, 1984 symbolized the inevitable outcome of Fascist rule.

Big Brother himself has become more and more of a symbol within the real world as well, especially in the days of increased government interference with civil liberties and a growing distrust of authority, among some groups the idea of Orwell's "all-powerful" and "all-seeing" Big Brother has been seen by some as almost prophetic.

Due to this the word "Big Brother" is often used by activists and opponents of political movements or parties to describe regimes, systems or individuals that they see as either abusive, manipulative or somehow sinister as a "Big Brother" state, this being a type of state in which the government is seen to have too much influence over people's lives. Variations of this term are a "Father Knows Best" state or a "Nanny" state. 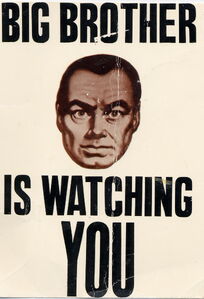 A "Big Brother is watching you" poster. 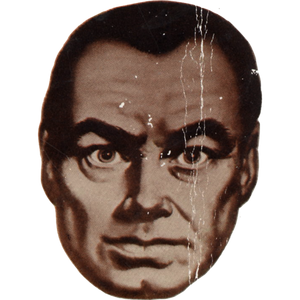